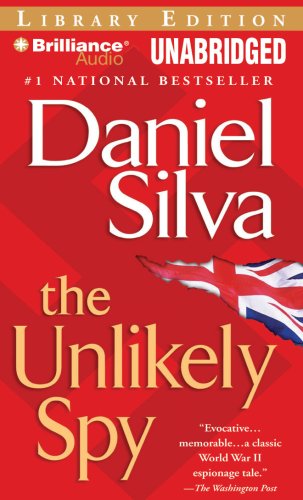 Bestselling author Daniel Silva’s celebrated debut novel, The Unlikely Spy, is “a roller-coaster World War II adventure that conjures up memories of the best of Ken Follett and Frederick Forsyth” (The Orlando Sentinel).

"In wartime," Winston Churchill wrote, "truth is so precious that she should always be attended by a bodyguard of lies." For Britain's counterintelligence operations, this meant finding the unlikeliest agents imaginable—including a history professor named Alfred Vicary. Handpicked by Churchill himself, Vicary must stop an unknown spy from uncovering the Allied battle plans for D-Day. The Nazis, however, have also chosen their operative carefully. Posing as a war widow and hospital volunteer, Catherine Blake is under direct orders from Hitler to seal the German victory—no matter what the cost.

“Layers of depth and intrigue...Silva succeeds with panache.” —USA Today

In this debut novel, veteran journalist Silva mines the reliable territory of World War II espionage to produce a gripping, historically detailed thriller. In early 1944 the Allies were preparing their invasion of Normandy; critical to the invasion's success was an elaborate set of deceptions--from phony radio signals to bogus airfields and barracks--intended to keep Hitler in the dark about when and where the Allied troops would arrive. Catherine Blake is the beautiful, ruthless spy who could bring the whole charade crashing down; Alfred Vicary is the brilliant but bumbling professor Churchill has tapped to protect the operation. Along with a teeming cast of other characters, real and fictional, they bring the chase to a furious and satisfying climax.

"BREATHTAKING . . . COMPELLING . . . A roller-coaster World War II adventure that conjures up memories of the best of Ken Follett and Frederick Forsyth."
--Orlando Sentinel