Items related to The Rose Hotel: A Memoir of Secrets, Loss, and Love...

Andalibian, Rahimeh The Rose Hotel: A Memoir of Secrets, Loss, and Love From Iran to America 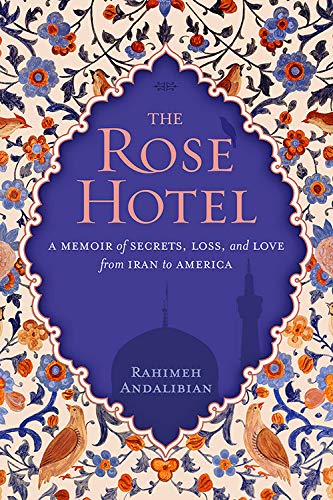 In this searing memoir, Rahimeh Andalibian struggles to make sense of two brutal crimes: a rape, avenged by her father, and a murder, of which her beloved oldest brother stands accused. Her journey, eloquently and intimately told, is a tribute to the resilience of families everywhere.
Andalibian takes us first into her family's tranquil, jasmine-scented days of prosperity in Mashhad. Iran, where she and her brothers grow up in luxury at the Rose Hotel, owned by her father. In the aftermath of hte 1979 revolution the family is forced to flee: first to the safety of a mansion in Tehran, next to a squalid one-room flat in London, and finally to California, where they discover they are not free from the weight of their own secrets. Caught between their parents' traditional values and their desire to embrace and American way of life, Andalibian and her brothers struggle to find peace in the wake of tragedy.
In the tradition of The Kite Runner, House of Sand and Fog, and Reading Lolita in Tehran, this is a universal story of healing and rebirth.
From the Trade Paperback edition.

RAHIMEH ANDALIBIAN was born in Tehran and moved with her family to California in 1979, at the onset of the Iranian revolution. Raised and schooled in LA, she is a clinical psychologist specializing in intergenerational family therapy. A dynamic speaker and a savvy, promotion-driven author, she speaks frequently at conferences and has promoted the book on Martha Stewart Radio and BlogHer.
From the Trade Paperback edition.

"A powerful and uplifting memoir of tragedy and healing." --Kirkus Review