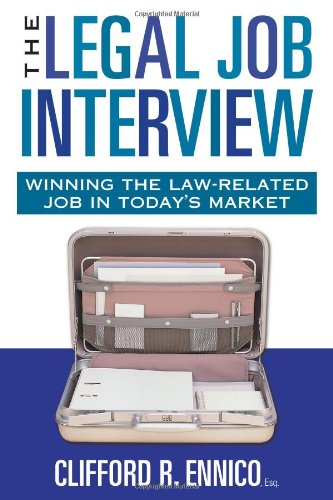 As a result of dynamic changes in the current legal job market, most legal professionals today have to spend a substantial amount of time planning their careers while still in law school, refining those plans as their careers unfold, and keeping their eyes open for changes in the legal environment. With so many of their peers vying for the same positions, legal job candidates who understand the special art of interviewing for legal jobs will stand out from the crowd. This unique guide covers all the topics they need to know, including:

During the 1980s, he worked on Wall Street, where he specialized in corporate finance, venture capital, and securities law. After a brief stint as in-house counsel for General Electric Capital Corp., he worked as a corporate lawyer for two Connecticut law firms before launching his own practice Fairfield, Connecticut.

Since 1990, Cliff has produced a series of informational products on legal career management---including Legal Job Interview, The Business Lawyer's Handbook, and Your Legal Career---and has toured law schools around the country doing lectures and seminars. He is also the Editor-in-Chief of the New York State Bar Association’s handbook on New York corporations, and edits the “Small Business Legal Forms” series of treatises for the West Group.