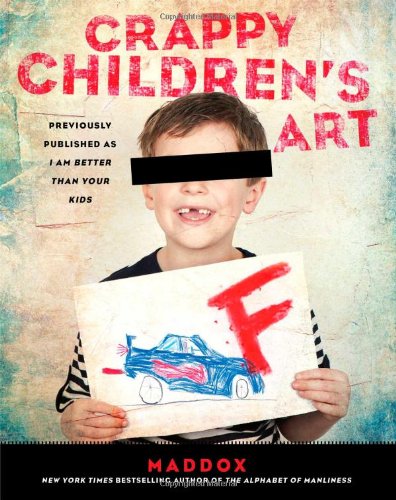 Previously published as I Am Better Than Your Kids.

From the New York Times bestselling author of The Alphabet of Manliness, the creator of “The Best Page in the Universe,” and overall genius, comes an outrageous, laugh-out-loud critique of children’s artwork that finally cuts those little smug know-it-alls down to size.

What people are saying about Maddox and Crappy Children's Art:

“You’re a menace to healthy development in children.”

“You’re right up there with Hitler, who destroyed thousands of kids’ lives by taking out their parents in concentration camps.”

“Saying you are better than a child just makes you a coward.”

“No one said you had to look at the artwork from your co-worker’s kids. To make an entire book to bash it? Sad.”

“would u like it if u were, like, 4, nd u do a picture nd u work on it for ages, nd u feel really proud, nd ur parents put it in their office, then sum asshole goes and says it’s crap, nd says it’s an F grade. Think about it.”

Maddox has been writing hilarious essays for his website, TheBestPageIntheUniverse.com, since 1997. Through word-of-mouth alone, it has become one of the most popular personal sites on the Internet. In 2006, he published his first book, The Alphabet of Manliness, a New York Times bestseller, followed by Crappy Children's Artwork based on his wildly popular article that has been viewed more than 20 million times. Maddox has also published a comic book based on his site, and he has a YouTube channel called “The Best Show in the Universe,” featuring clips viewed by more than 40 million fans.