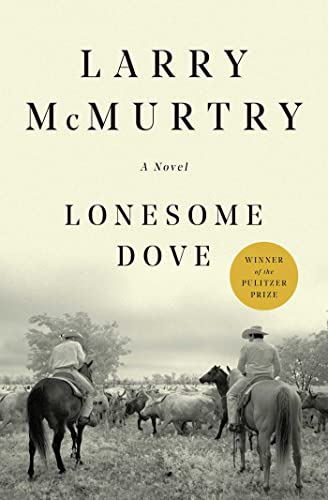 A love story, an adventure, and an epic of the frontier, Larry McMurtry’s Pulitzer Prize–winning classic, Lonesome Dove, the third book in the Lonesome Dove tetralogy, is the grandest novel ever written about the last defiant wilderness of America.

Journey to the dusty little Texas town of Lonesome Dove and meet an unforgettable assortment of heroes and outlaws, whores and ladies, Indians and settlers. Richly authentic, beautifully written, always dramatic, Lonesome Dove is a book to make us laugh, weep, dream, and remember.

Larry McMurtry, in books like The Last Picture Show, has depicted the modern degeneration of the myth of the American West. The subject of Lonesome Dove, cowboys herding cattle on a great trail-drive, seems like the very stuff of that cliched myth, but McMurtry bravely tackles the task of creating meaningful literature out of it. At first the novel seems the kind of anti-mythic, anti-heroic story one might expect: the main protagonists are a drunken and inarticulate pair of former Texas Rangers turned horse rustlers. Yet when the trail begins, the story picks up an energy and a drive that makes heroes of these men. Their mission may be historically insignificant, or pointless--McMurtry is smart enough to address both possibilities--but there is an undoubted valor in their lives. The result is a historically aware, intelligent, romantic novel of the mythic west that won the 1986 Pulitzer Prize for fiction.