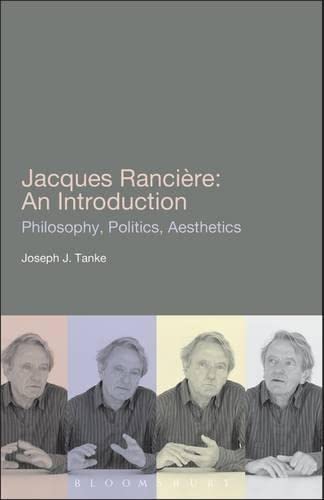 Jacques Rancière: An Introduction offers the first comprehensive introduction to the thought of one of today's most important and influential theorists. Joseph Tanke situates Rancière's distinctive approach against the backdrop of Continental philosophy and extends his insights into current discussions of art and politics.  Tanke explains how Rancière's ideas allow us to understand art as having a deeper social role than is customarily assigned to it, as well as how political opposition can be revitalized.  The book presents Rancière's body of work as a coherent whole, tracing key notions such as the distribution of the sensible, the aesthetics of politics, and the supposition of equality from his earliest writings through to his most recent interventions.  Tanke concludes with a series of critical questions for Rancière's work, indicating how contemporary thought might proceed after its encounter with him.

The book provides readers new to Rancière with a clear overview of his enormous intellectual output. Engaging with many un-translated and unpublished sources, the book will also be of interest to Rancière's long-time readers.

The first comprehensive introduction to one of the most influential French thinkers writing today, exploring Rancičre's ideas on philosophy, aesthetics and politics.

Joseph J. Tanke is based at the University of Hawaii. He has published and lectured extensively on issues in Continental philosophy, with a special emphasis on aesthetics and politics, as well as the works of Michel Foucault, Gilles Deleuze, and Jacques Rancičre. Professor Tanke was recently named to the editorial board of Philosophy and Social Criticism, and his essays are currently being translated into two other languages. In addition to having studied philosophy in both the United States and Europe, Joseph holds a degree in art history and has worked for several art institutions.