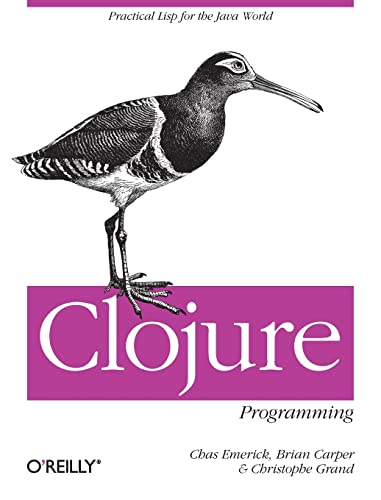 Clojure is a practical, general-purpose language that offers expressivity rivaling other dynamic languages like Ruby and Python, while seamlessly taking advantage of Java libraries, services, and all of the resources of the JVM ecosystem. This book helps you learn the fundamentals of Clojure with examples relating it to the languages you know already, in the domains and topics you work with every day. See how this JVM language can help eliminate unnecessary complexity from your programming practice and open up new options for solving the most challenging problems.

Clojure Programming demonstrates the language’s flexibility by showing how it can be used for common tasks like web programming and working with databases, up through more demanding applications that require safe, effective concurrency and parallelism, data analysis, and more. This in-depth look helps tie together the full Clojure development experience, from how to organize your project and an introduction to Clojure build tooling, to a tutorial on how to make the most of Clojure’s REPL during development, and how to deploy your finished application in a cloud environment.

Practical Lisp for the Java World

Chas Emerick is the founder of Snowtide Informatics, a small software company in Western Massachusetts. Since 2008, he has helped to develop the core Clojure language and many Clojure open source projects. Chas writes about Clojure, software development practices, entrepreneurship, and other passions at cemerick.com.

Brian Carper is a professional programmer in the field of psychological research. He uses Clojure for data analysis and web development. He's the author of a Clojure-to-CSS compiler and relational database library, and writes about Clojure and other topics at http://briancarper.net.

Christophe Grand is an independent consultant, based near Lyon, France. He tutors, trains and codes primarily in Clojure. A participant in developing the core Clojure language, he also authored the Enlive and Moustache libaries and is a contributor to Counterclockwise, the Clojure IDE for Eclipse. Christophe writes on Clojure at clj-me.cgrand.net.

Book Description O'Reilly Media, Inc, USA, United States, 2012. Paperback. Condition: New. Language: English. Brand new Book. Learn what many Java programmers have recently discovered: the Clojure language offers a practical alternative for solving demanding problems, using existing Java libraries, frameworks, and services. With this book, you get a solid grounding in Clojure fundamentals, based on the environments you already familiar with-whether you're working with data, concurrency, application interfaces, or other challenges. Learn how this JVM language can make your work simpler and help you be more productive. Clojure Programming demonstrates the language's flexibility and wide use by taking a Java project and converting it to Clojure. This in-depth look also shows Ruby and Python developers that Closure is just as expressive and sophisticated with one added advantage: all the resources of the JVM.* Learn how to switch to Clojure without losing your investment in the Java platform * Understand the advantages of Clojure as a dialect of the Lisp language * Discover how this language works in several problem domains * Apply it in different data environments, including big data solutions with Hadoop * Use Clojure as a scripting language, a driver for Swing/SWT interfaces, and other functions * Deploy large web applications across tens or hundreds of nodes with Clojure. Seller Inventory # AAH9781449394707