Items related to In Sunlight and in Shadow

Mark Helprin In Sunlight and in Shadow

In Sunlight and in Shadow 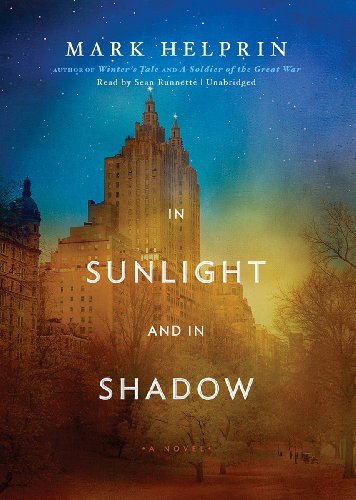 Returning home after serving in World War II to run his family business in New York, paratrooper Harry Copeland falls in love with young singer and heiress Catherine Thomas Hale, who risks everything to break off her engagement to another man. By the author of Winter's Tale. Simultaneous.

Q. In Sunlight and In Shadow has been likened to both your Winter’s Tale and A Soldier of the Great War. What do you say to that?

A. When I wrote Winter’s Tale, I’d often walk ten or twenty miles a day through New York, taking in overwhelming rafts of imagery, sounds, views. And when I wasn’t doing that, I virtually lived at The New York Historical Society, just as I had jeopardized my freshman year in college by sitting on the floor of the stacks at the New York section, mesmerized by one book after another.

The result of these obsessions was to live in the world of New York circa 1900 as if I were really there, as if it were still bustling invisibly right where it had been, and I could see and feel it. The book opens with, “I have been to another world, and come back. Listen to me.”

With In Sunlight and In Shadow, the effect is perhaps stronger, and, for me, easier. It takes place not in a world I had to seek but one – New York in the 40s – into which I was born. The density and accuracy of the images, the onrush of memory, the stunning recollections of sound, speech, song, dress, all came easily. The people in In Sunlight and In Shadow are, with great poetic liberty, people I knew and/or loved – even the gangsters, the financiers, the actresses, intellectuals, soldiers, and factory workers.

When I finished A Soldier of the Great War, I gave it to several Italians to see if the pitch was correct, but with In Sunlight and In Shadow I didn’t have to do that, because there is nothing I know better. The book is like Winter’s Tale in that I have made it as obsessively truthful and beautiful as I could, in the hope that a reader may feel that he is in the book rather than where he is, and perhaps even wish to remain for a while, as in waking from a dream.

It’s unlike Winter’s Tale and more like A Soldier of the Great War in that in it one doesn’t depart from the texture of reality, as exceptional and intense as that reality may be. When my father read Winter’s Tale, which I had dedicated to him shortly before he died, he said, now you’ve got to write a book as enchanting as this but in which every element is possible in the real world in which we live. Then you would have something really marvelous.

That’s what I’ve tried to do. Whether or not I’ve succeeded is not for me to judge, but I can say that writing the book gave me the same feeling, persistently over time, and always strongly, as falling in love. I’m not quite sure what that means except that it’s great to have a job that you would do even if you weren’t paid for it.

1. In Sunlight and in Shadow -