Items related to Three Artists In the Andes: The Ghosts of Licancabur...

Gregory William Frux Three Artists In the Andes: The Ghosts of Licancabur - A True Story

Three Artists In the Andes: The Ghosts of Licancabur - A True Story 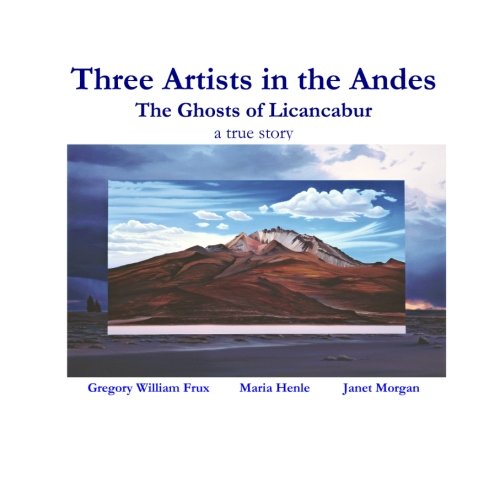 In the fall of 1994, a group of friends-including three artists-traveled to Bolivia to see a total solar eclipse and to visit remote regions of the altiplano-mountainous areas of the Cordillera Real, Cordillera Apolobamba and the Sud Lípez. This story, The Ghosts of Licancabur, takes place during the third week of the trip, after the eclipse viewing and beginning at the end of the paved road. It is based on journal entries and the hazy, romanticized recollections of the author. The paintings by Maria Henle and Janet Morgan were created after the trip based on visual memory and photo references. The painting by Gregory Frux was based on a smaller version painted in oils on site amid blowing dust and later photo references. Maria's essays about her paintings are taken from the exhibition catalog "In the Andes," which she authored.

Gregory Frux paints both urban landscape and wilderness scenes, the latter inspired by mountaineering. His landscapes range from Northeastern United States’ forests, to Rocky Mountains, desert California, Alaska, Yukon and Bolivian Andes. He served as artist-in-residence in Glacier, Joshua Tree and Death Valley National Parks and worked as an artist aboard ships in Antarctica and Arctic Norway. Frux’s paintings have been exhibited at Lincoln Center, the Cordova Historical Museum, the Coney Island Museum, the Salmagundi Club, Long Island University, Brooklyn College, offices of HBO and the United States Embassies in Ethiopia and Madagascar. He and Janet were the first Americans to show at the Kyrgyz National Museum of Art. The Library of Congress, Metropolitan Transportation Authority, NYC Department of Education and National Park Service own his work.