Items related to Modern Approach To Classroom Discipline And Management::...

Modern Approach To Classroom Discipline And Management:: Prevention And Intervention Strategies For Students With Behavioral Problems 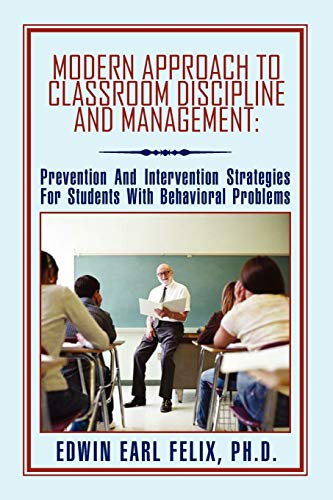 There are many serious social, and economic problems that impact student sâ€™ behavior. Because countless minorities are at risk of behavior problems caused by poverty, racism, discrimination, and other negative conditions, special attention needs to be given to the development of programs and strategies to prevent behavioral problems. Developmental guidance programs in elementary schools that attend to the needs of all children are effective ways to prevent problems before they begin. Experts on poverty and inequality see a role for preschool intervention to help children from disadvantaged backgrounds have a better chance at success when they start elementary and secondary schools. Several models have been discussed such as reinforcing and rewarding behaviors, and consequences and punishment. In order to minimize disruptive behaviors, effective classroom management is the heart of preventing discipline problems. Teachers have put in place beginning the first day of school, their rules, procedures, and expectation in order to reduce problems in the classroom. A positive classroom climate is also needed to improve student learning and encourage good behavior.

Edwin Earl Felix is currently employed with the Houston Independent School District (HISD), and serves as an adjunct professor at Houston Community College (HCC) where he teaches sociology. He has worked extensively with teenagers at Burnett Bay-land Home, a branch of the Harris County Juvenile Probation Department in Texas. He received my B.A. from Wayland Baptist University, and my M.A, from Prairie View A & M University in Texas. He completed the Ph.D. in Educational Leadership at Union Institute & University in Cincinnati, Ohio. He has taught at the St. Andrews Methodist School in Grenada during the period 1976 - 1979. In 1979 he received a track and field scholarship to study at Wayland Baptist University where he competed in several district cross country, and track and field events including NAIA championships. He completed several marathons in the Caribbean, New York City, Houston, and Dallas. He published his first book "Koresh" The Waco Holocaust in 1994. His interests include spending time with his wife and son, writing, and jogging.

5. Modern Approach To Classroom Discipline And Management:: Prevention And Intervention Strategies For Students With Behavioral Problems

6. Modern Approach To Classroom Discipline And Management:: Prevention And Intervention Strategies For Students With Behavioral Problems