Items related to Basic Economics: A Common Sense Guide to the Economy

Basic Economics: A Common Sense Guide to the Economy 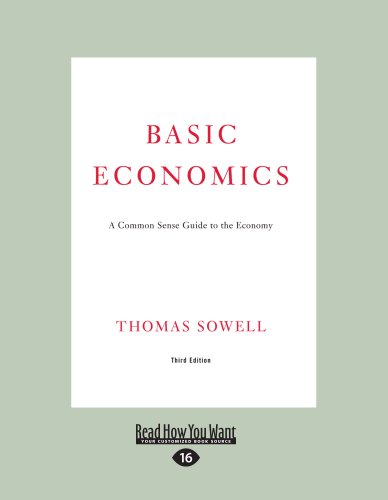 Basic Economics is a citizens guide to economics-for those who want to understand how the economy works but have no interest in jargon or equations. Sowell reveals the general principles behind any kind of economy-capitalist, socialist, feudal, and so on. In readable language, he shows how to critique economic policies in terms of the incentives they create, rather than the goals they proclaim. With clear explanations of the entire field, from rent control and the rise and fall of businesses to the international balance of payments, this is the first book for anyone who wishes to understand how the economy functions.

Thomas Sowell has taught economics at Cornell, UCLA, Amherst, and other academic institutions, and his Basic Economics has been translated into six languages. He is currently a scholar in residence at the Hoover Institution, Stanford University. He has published in both academic journals and in such popular media as the Wall Street Journal, Forbes magazine, and Fortune, and he writes a syndicated column that appears in newspapers across the country.

"Clear and concise... Among economists of the past 30 years, (Sowell) stands very proud indeed." Wall Street Journal "Basic Economics is not only valuable for a general lay-person audience; it would also benefit lawyers, politicians, and yes, economists as well." Washington Times"