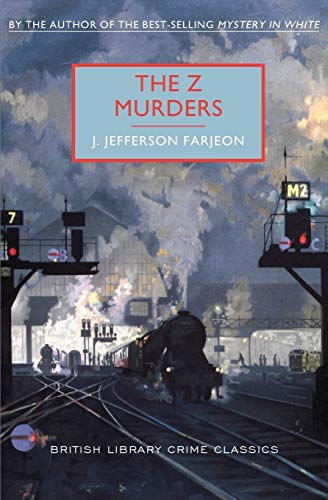 Richard Temperley arrives at Euston station early on a fogbound London morning. He takes refuge in a nearby hotel, along with a disagreeable fellow passenger, who had snored his way through the train journey. But within minutes the other man has snored for the last time - he has been shot dead while sleeping in an armchair. Temperley has a brief encounter with a beautiful young woman, but she flees the scene. When the police arrive, Detective Inspector James discovers a token at the crime scene: a small piece of enamelled metal. Its colour was crimson, and it was in the shape of the letter Z.

Temperley sets off in pursuit of the mysterious woman from the hotel, and finds himself embroiled in a cross-country chase - by train and taxi - on the tail of a sinister serial killer. This classic novel by the author of the best-selling Mystery in White is a gripping thriller by a neglected master of the genre.

J. JEFFERSON FARJEON (1883-1955) was the author of more than sixty crime and thriller novels. His work was highly acclaimed in his day; Dorothy L. Sayers wrote that 'Jefferson Farjeon is quite unsurpassed for creepy skill in mysterious adventures'. Farjeon is now best known as the author of Number Seventeen, a play that was adapted for the big screen by Alfred Hitchcock. His Christmas crime novel, Mystery in White, was republished by the British Library in 2014, with Thirteen Guests and The Z Murders following in 2015.

"An unnerving mystery and an intriguing look at what is one of the first serial-killer novels." (Connie Fletcher Booklist)

"Mindful of the 1959 Hitchcock film North by Northwest, this reprint of a thrilling 1932 suspense grips the audience from start to finish. Although filled with too much happenchance, J. Jefferson Farjeon (see recently republished Thirteen Guests) provides a fun 'historical' amateur sleuth starring foggy London, a bungling hero, a femme fatale damsel in distress and a diligent killer." (Midwest Book Review)