Items related to Murder of a Lady: A Scottish Mystery (British Library... 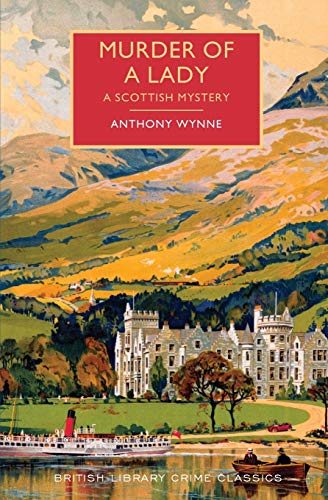 Duchlan Castle is a gloomy, forbidding place in the Scottish Highlands. Late one night the body of Mary Gregor, sister of the laird of Duchlan, is found in the castle. She has been stabbed to death in her bedroom―but the room is locked from within and the windows are barred. The only tiny clue to the culprit is a silver fish's scale, left on the floor next to Mary's body.

Inspector Dundas is dispatched to Duchlan to investigate the case. The Gregor family and their servants are quick―perhaps too quick―to explain that Mary was a kind and charitable woman. Dundas uncovers a more complex truth, and the cruel character of the dead woman continues to pervade the house after her death. Soon further deaths, equally impossible, occur, and the atmosphere grows ever darker. Superstitious locals believe that fish creatures from the nearby waters are responsible; but luckily for Inspector Dundas, the gifted amateur sleuth Eustace Hailey is on the scene, and unravels a more logical solution to this most fiendish of plots.

Anthony Wynne wrote some of the best locked-room mysteries from the golden age of British crime fiction. This cunningly plotted novel―one of Wynne's finest―has never been reprinted since 1931, and is long overdue for rediscovery.

ANTHONY WYNNE is a pseudonym of Robert McNair-Wilson (1882-1963), who wrote twenty-seven detective novels featuring Eustace Hailey, a physician and amateur sleuth. He also published on economics and history, notably a biography of Napoleon.

Murder of a Lady is a mystery novel set in Scotland and originally published in 1931. It's the amateur sleuth, Hailey, that's the main character and who solved the case. It's a "locked room" mystery that could potentially be solved in several ways. There were clues, and you could guess whodunit from the clues, but some critical clues weren't discovered until nearly the end....I originally guessed something similar to what the second inspector concluded, and my solution still seems more plausible to me than the actual solution. Having worked with the murder weapon before, I think whodunit was extremely lucky that everything happened exactly right to get the desired end and that no one noticed that certain things went missing at the time of the crime....The characters were more "types" of people or pieces of a puzzle than people to sympathize with or hate. There was no sex or bad language. Overall, I still enjoyed reading the story and would recommend this mystery.

This was a fairly dark mystery with a good setting. I found it much more an old fashioned "puzzle" but it was an enjoyable read.

I wasn't familiar with this author, but I love to read British mysteries of this time period and the locked-room scenario is a favorite. The ending was not expected.

The major focus in Murder of a Lady is the puzzle: The characters are only developed so far as they serve the plot. And what a plot it is, full of impossibilities, troubles from the past, tormented lovers, and a slew of mixed motives. There is not just one impossible murder: The following murders seem equally impossible. In the course of the characters' investigations, Wynne brings up several plausible solutions before the matter is fully cleared up....Murder of a Lady is another entry into Poisoned Pen Press's publication of The British Library Crime Classic collection. Out of print since 1931, the novel is perfect for readers who love Agatha Christie but who have made their way through all her works - or who just want a change of pace while keeping to the classic, sleek, constructions of the era...

First published in 1931, this reissue in the British Library crime classics series brings back what some consider a more innocent era, when psychology seemed simpler and no one ever used terms like sociopath or psychopath. In his heyday, Wynne (1882-1963) was considered to be the master of locked-room mysteries, and he acquits himself well in this Dr. Eustace Hailey mystery. Hailey travels to a castle in the Scottish Highlands to investigate the demise of Miss Mary Gregor, sister to the laird. She has been found stabbed to death in her locked bedroom. Miss Gregor at first is described as pious and good. But it soon becomes clear that pious can be interpreted as sanctimonious and goodness can serve as a shield for nastier intentions. Others follow her to the grave in equally inexplicable circumstances. Those who like black-and-white films, in which ladies and gentlemen dress for dinner and everyone has frightfully good manners, are in for a treat.

A true locked room mystery from the Golden Age of Mystery writing, Murder of a Lady was chock full of twists and turns. The writing was of that era, and as such, more formal than our modern ear is attuned to, with many words and phrases which required thought. Not only was the murder mystery itself wickedly lovely, but the author's descriptions placed me right there in Scotland in 1931....Lies, half-truths, unspoken tragedy, paychosis, jealousy, piety, gambling debts, forbidden love....it is all here in the many twists, turns, plots and subplots that make Murder of a Lady a Golden Age Classic that truly withstands the test of time!

Although the focus is largely on the locked-room puzzle of how the crime could have been done, there's some pretty good characterisation along the way. I particularly liked the way Wynne portrayed the women, showing them as subordinate within this society, but strong within themselves; victims sometimes, but not hysterical ones; and intelligent, worthy partners for the men they loved....Of course, there is more than one murder, and I have to admit that the second one took me totally by surprise and actually made me gasp a little. There's no real horror aspect in the book, but it nevertheless builds a great atmosphere of rather creepy tension, aided by the superstitions of the Highland folk....I enjoyed this one very much another author the British Library has managed to add to my list!

This is an intriguing story with a great many undercurrents and tensions between the occupants of the castle, most of whom seem to have been scared of the murdered woman. The plot is perhaps a shade melodramatic for today's readers but the plot and the characters are very well done and the psychological motivations are realistic....There is an atmosphere almost of menace which permeates the whole book and I found myself tempted to keep looking over my shoulder in fear as I read.

This 1931 novel, now republished as part of the British Library's Crime Classics series, is a cunningly concocted locked-room mystery, a staple of Golden Age detective fiction. Actually, it's a series of locked-room mysteries, all occurring within the gloomy, twisted corridors of Duchlan Castle in the Scottish Highlands. The laird and lady of the stately but dilapidated home are an elderly brother and sister who seem to make an effort to make their house uncomfortable and dreary. Wynne’s depiction of the home and the way it mirrors the psychology of its inhabitants is worthy of Robert Louis Stevenson's Dr. Jekyll and Mr. Hyde. The novel shifts from mood to murder when the sister, Mary Gregor, is found dead in her room, with a knife wound near her throat. The room had been locked from the inside and the windows shut. A fish scale is found on the wound. This evidence is observed by Wynne's recurring hero, the physician and amateur sleuth Dr. Eustace Hailey, who has been called to the scene. From this point on, murder follows murder, all of them "impossible crimes." The way that Hailey uses his long experience, especially with observing human nature, is absolutely fascinating. Seeing what happens in real time from Hailey's point of view adds to the delight in watching him solve these puzzles. As Dorothy L. Sayers wrote (as quoted in the introduction to this volume): "Mr. Anthony Wynne excels in the solution of apparently insoluble problems." A great return of a great detective. (starred review)

A talented amateur sleuth takes on a locked-room murder in this golden age whodunit....This classic British mystery, first published in 1931, has enough complex plotting and red herrings to win a new generation of fans for the largely forgotten Wynne.

Murder of a Lady