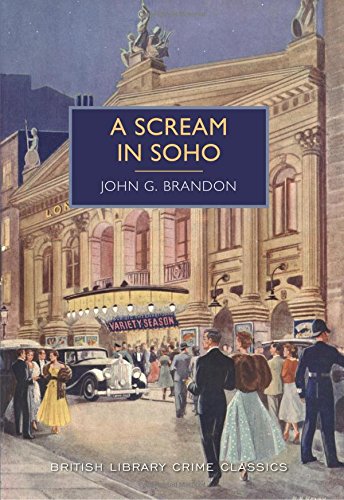 "[T]his period piece illuminates what it was like to try to investigate crimes during blackouts, when cops literally had to feel their way along their beats." ―Booklist

'For a scream in the early hours of the morning in Soho, even from a female throat, to stop dead in his tracks a hard-boiled constable, it had to be something entirely out of the ordinary.'

In Soho during the blackouts of the Second World War, a piercing scream rends the air and a bloodied knife is found. Detective Inspector McCarthy is soon on the scene. He must move through the dark, seedy Soho underworld―peopled by Italian gangsters, cross-dressing German spies, and glamorous Austrian aristocrats―as he attempts to unravel the connection between the mysterious Madame Rohner and the theft of secret anti-aircraft defence plans.

This evocative and suspenseful London novel from the golden age of British detective fiction is now republished for the first time since the 1950s, with an introduction by award-winning crime novelist Martin Edwards.

JOHN G. BRANDON (1879-1941) was an Australian-born crime writer who lived in England. He was the author of more than 100 detective novels, many of which feature richly described London locations.

Review:
Another trip to the vaults of the British Library Crime Classics discloses this decidedly nonclassic story of gangsters, espionage, and murder most frequent in 1940 London. The Blitz has yet to commence, but blackouts keep the streets of Soho mostly empty at night. So it's a doubly unusual event when DI Patrick Aloysius McCarthy, who lives right around the corner from the patch he works, hears a scream pierce the neighborhood past midnight, not long after he's parted from Sir William Haynes, the Assistant Commissioner. A quick search of the most likely source reveals a stiletto and a woman's handkerchief, both soaked in blood, but no corpse. But that's the last time in this tale, originally published in 1940, when there's a shortage of dead bodies. Even before the CID discovers the remains of Madame Rohner, the mysterious fortuneteller who was actually a man, McCarthy stumbles across the body of PC Harper, whose life was sacrificed to the killer's escape. More violent deaths will follow, and although it's not entirely certain whether they're the work of spies trying to pass wartime secrets to Germany or locally grown gangsters like Floriello Mascagni and Mo Eberstein, that's about the only mystery on offer here. The pace is rapid, the dialogue functional, and the helter-skelter plotting evidently designed to encourage page turning rather than reflection. Despite the pressures of the war, many readers will surely wax nostalgic for Brandon's morally simpler world, unspoiled by any trace of such brainy contemporaries as Agatha Christie and Dorothy L. Sayers. Given the proportions of the main ingredients—unbridled criminal mayhem, stolid and limited detection, striking but disposable characters, a smidgen of mysterymongering—in the stew he's served, Brandon's matter-of-fact hero may represent a missing link between Bulldog Drummond and Jack Reacher. (Kirkus)

This was a brilliant, post-war thriller which was electric to read. From start to finish, this book was electrifying and well worthy of the 5 stars I gave it. (CarpeLibris)

This republished mystery from the early days of WWII, part of the British Library’s Crime Classics series, will give today's readers an insider’s look at London during the blackouts, from the perspective of both criminals and police. The setting is then-seedy but scintillating Soho Square, a mash-up of victims and predators. During one of the air-raid blackouts, a woman’s scream is heard. When Detective Inspector MacCarthy arrives, a stiletto blade and a woman’s lace handkerchief are found, but no body. The evidence is puzzling: the stiletto is the kind that women hide in their bodices; the handkerchief could be the victim’s or the murderer’s. MacCarthy is a pleasure to watch, as he doggedly tries to piece together the clues that eventually lead to a plot to steal anti-aircraft defense plans. The writing is overblown by today’s standards, but most of the interest comes from the ways this period piece illuminates what it was like to try to investigate crimes during blackouts, when cops literally had to feel their way along their beats. Pair this one with Cathi Unsworth’s Without the Moon (2016). (Booklist)