Items related to Forgotten Hostages: A Personal Account of Washington's... 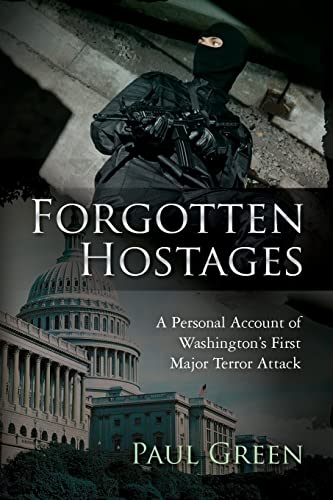 Along with 125 of his colleagues, Paul Green faced threats of beheading and death from the Hanafi Muslim terrorists who violently captured the B'nai B'rith building on March 9, 1977. Men and women were shot, stabbed, beaten and assaulted as the attack gained momentum. Across town, from a second attack, the future mayor of Washington, Marion Barry, almost died from a shotgun pellet near his heart and a young reporter, Maurice Williams, was killed. A third location, a mosque, was also attacked with multiple hostages taken. Washington's first major terrorist incident, with its anti-Semitic vitriol and explosiveness, left more than 150 lives hanging in the balance. With Washington in chaos, the future of all the hostages was in jeopardy. It was the first time local and federal law enforcement authorities faced such a terror attack in our nation's capital. When three Islamic ambassadors became involved in the rush to try and find a way to save the hostages lives, it became an international event. But for the hostages, it was 40 hours of terror, pain, dismay, enlightenment and hope.

Paul Green Bio In 1977, as an executive with B’nai B’rith International, he and his colleagues were held hostage in the first major terrorism and hostage incident in the United States. His experiences in this event have led to his first novel, Forgotten Hostages, A Personal Account of Washington’s First Major Terrorism Incident. A number of years ago, he turned the event into a unique management program for executives that has received accolades for its uniqueness and creativity. He is President of Paul Green Enterprises which offers management and business consultative services to companies, associations and individuals. Over a 40 year career, he has held executive management positions in a number of national organizations representing the scrap recycling, information technology, telecommunications and mortgage industries. He has provided management and leadership consulting to organizations and business entities and now adds author to his resume. Most recently, he served as Senior Vice President of Corporate Relations for the Mortgage Bankers Association, an organization that represents over 2200 member companies. During his tenure in this position, he managed and led a staff that was responsible for over $300 million in revenue generation. He obtained his undergraduate degree from the University of Miami and earned a Master's degree from George Washington University. He and his wife Jane split their time between the Maryland and South Florida areas and have two grown daughters, Emily and Jessica and 4 grandchildren. He has two websites, one dedicated to Forgotten Hostages – www.forgottenhostages.com and the other is www.paulgreenenterprises.com

5. FORGOTTEN HOSTAGES: A PERSONAL A