Fricker, Lloyd D. Succeed in Science and Avoid Getting a Real Job

Succeed in Science and Avoid Getting a Real Job 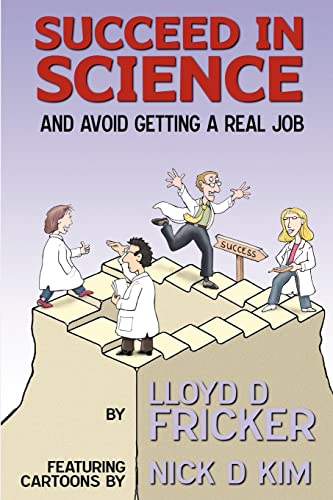 Science is a great profession. As a scientist, you actually get paid to have fun all day and night! What could be better? This book is focused on the career path of an active research scientist, from post-doctoral training to that of group leader running a successful research program. Most of the essential things you need to succeed as a scientist and group leader are not taught in school. Topics covered in this book include the process of finding a job, setting up a lab, making major discoveries, and moving up the ranks. Some chapters include essential things for all scientists, such as writing scientific papers and attending conferences. A couple of chapters are specialized for academic positions that involve teaching and writing grant applications. Humor pieces (by Lloyd Fricker) and cartoons (by Nick Kim) are interspersed throughout the book to provide comic relief and emphasize important points in a light-hearted way.

Lloyd Fricker is a Professor in the Departments of Molecular Pharmacology and Neuroscience at Albert Einstein College of Medicine in New York City. When not leading a research group, writing and reviewing scientific papers and grant applications, teaching medical and graduate students, organizing and attending scientific conferences, and serving on various committees, he spends his time writing humor. His humor pieces (including some in the present book) have appeared in Annals of Improbable Research, Journal of Irreproducible Research, The Einstein Journal of Medicine and Biology, H.M.S. Beagle, and several other journals, as well as youtube. His first book on scientific advice/humor, “How to Write a REALLY Bad Grant Application (and Other Helpful Advice For Scientists)” was published in 2004. Nick Kim (cartoonist/illustrator) has a background as a Senior Lecturer and local government scientific adviser in Applied Environmental Chemistry and currently lives in Wellington, New Zealand. In his spare time he draws from inspiration as a scientist and creates cartoons. His cartoons have appeared on the web since 1994 (http://www.lab-initio.com/), and in science-related publications such as Annals of Improbable Research, Physics Today, Chemical Innovation, New Scientist, Skeptic (UK), Chemistry in Australia, and New Zealand Science Monthly. Nick is also a contributing editor for the Annals of Improbable Research.

1. Succeed in Science and Avoid Getting a Real Job

2. Succeed in Science and Avoid Getting a Real Job