Items related to The Voice of the Night

Koontz, Dean The Voice of the Night

The Voice of the Night 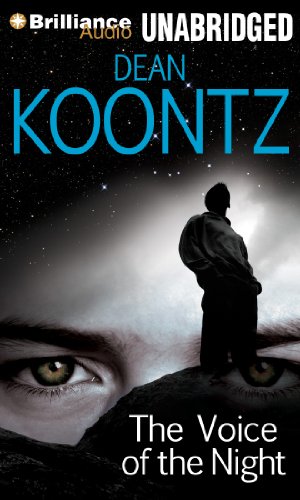 No one could understand why Colin and Roy were best friends. Colin was so shy; Roy was so popular. Colin was nervous around girls; Roy was a ladies’ man. Colin was fascinated by Roy—and Roy was fascinated by death. Then one day Roy asked his timid friend: “You ever killed anything?” And from that moment on, the two were bound together in a game too terrifying to imagine...and too irresistible to stop.

The books of Dean Koontz are published in 38 languages, and worldwide sales top 400 million copies. Eleven of his novels have risen to number one on the New York Times hardcover bestseller list, and several have been adapted into feature films and TV miniseries. Dean and Gerda Koontz live in southern California with their golden retriever, Anna, grand-niece of the famous and beloved Trixie.

Koontz brings his usual suspenseful touch to this 1980 novel. Young teens Colin and Roy become fast summer pals. But it doesn't take long for geeky Colin to see that athletic Roy has a twisted obsession: death. This teen thriller revolves around their relationship, and Patrick Lawlor does a fine job with their voices. He gives Roy a slightly malevolent growling tone; Colin's voice is a bit higher pitched. Lawlor doesn't do as well with minor characters, such as the clichˆ©d matronly librarian, the overbearing father, and the hardworking mother who is too tired to listen to her son. But the bulk of the book is boy versus boy, and Lawlor keeps the story moving. He captures the boys' anger and vengeance as dark secrets come to the surface. M.B. © AudioFile 2008, Portland, Maine-- Copyright © AudioFile, Portland, Maine