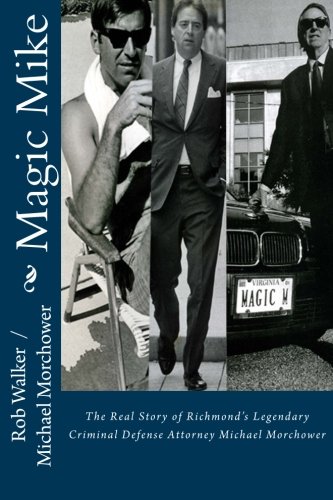 I came to the University of Richmond in 1958 to play basketball. Unfortunately, I wrote an article in the student newspaper criticizing my coach for incompetence and, as a result, I sat on the bench for the rest of my basketball career. After three years of law school, I became an FBI agent, then a Federal prosecutor, then a Magistrate Judge. Finally, I became a defense attorney and found my niche and success. I was fortunate to be lead defense attorney in some of the most celebrated criminal cases in Richmond and throughout Virginia. Enjoy the read, it's better than fiction because it's real! Magic Mike

Michael Morchower retired at the end of 2012 after a 40 year career. Where once his life was consumed by the law, it is now dominated by his dogs, Tiger and Google, wife, Kathy, and cats, Joey, Ozzie and Taj. They all reside in Irvington, Virginia.