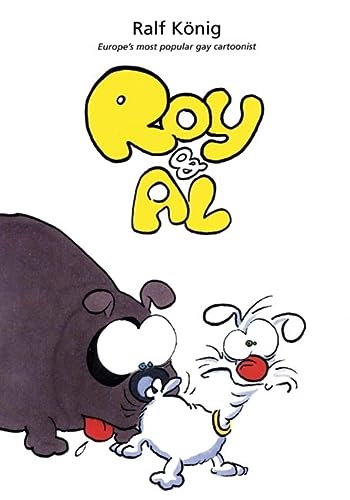 Roy & Al is the first English-language book by Europe’s most popular gay cartoonist, Germany’s Ralf König, whose collections have sold over 250,000 copies and have been translated into five languages. Roy & Al is a hilarious, erotically charged series of gay comics starring two dogs whose owners are dating. Al, a purebred, is rather fey, and treats the unsophisticated with disdain, while Roy, a mongrel, is coarser and more down-to-earth (and a tad overweight). Any similarities between masters and dogs are strictly intentional. Roy & Al is an uproarious vision of contemporary gay life through the eyes of man’s best friend.

Ralf König is Europe?s most popular gay comic artist; his books, written in German, have been translated into French, Dutch, Spanish, Italian, and Norwegian, and have sold over 250,000 copies in total. He has a monthly comic strip in Germany. He lives in Cologne, Germany.

I spent most of the night with my feet propped up on my desk, chuckling over every page—much to the irritation of those in the newsroom who actually wanted to make the paper's deadline. (Warning: It's not for those who find cartoon sex disturbing).
—The Vancouver Province blog (Province blog)

König's work is most reminiscent of the early days of gay comics such as Gay Comix and Meatmen ... It pushes boundaries, demanding more than mere acceptance but also an appreciation of gay life in all its outrageousness—or, more generally of life in all the diversity of its outrageousness, whether gay or straight, German or American, vanilla or kinky.
—EdgeBoston.com (EdgeBoston.com)