Items related to To Heal the Scourge of Prejudice: The Life and Writings...

Easton, Hosea To Heal the Scourge of Prejudice: The Life and Writings of Hosea Easton

To Heal the Scourge of Prejudice: The Life and Writings of Hosea Easton 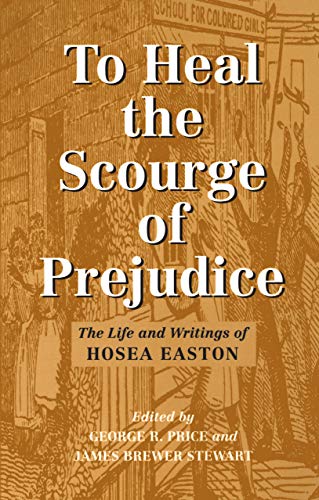 How did racial prejudice originate and why has it been so deeply rooted in American culture? What have been the long-term effects of prejudice on the intellectual, communal, and psychological resources of African Americans? How might the nightmare of racial domination be truly brought to an end? Still pertinent today, these were among the key questions addressed more than a century and a half ago by Hosea Easton (1799–1837), an important yet long neglected activist and intellectual. A black minister from New England, Easton rose to prominence during the 1820s and 1830s by joining in the struggle of free African Americans to resist southern slavery and secure racial equality. From this experience he developed a deep understanding of the problem of "race" in the United States and became a trenchant critic of white supremacy and its devastating consequences. This volume brings back into print the only extended writings of Easton that have survived into our time: his insightful, almost prescient A Treatise on the Intellectual Character, and the Civil and Political Condition of the Colored People of the U. States, first published in 1837; and his passionate 1828 Thanksgiving Day "Address." The book also provides a biographical portrait of Easton and his family, drawn from primary documents as well as secondary sources in the areas of biography, genealogy, and social history.

"Easton's Treatise is essential reading for anyone studying race, slavery, reform, and African Americans in the antebellum era. Publication of the Treatise alone is a significant contribution, but even better, it is combined with a brilliant introduction rich with formerly unknown biographical detail about Easton and his family and with invaluable background that situates the man and his book in a vivid, accurate context. I plan to be among the first to adopt this book for my courses."―Peter Hinks, author of To Wake My Afflicted Brethren:

David Walker and the Problem of Antebellum Slave Resistance

"David Walker's 1829 Appeal is generally regarded as the most radical black protest statement of the nineteenth century, but intellectually, Easton was even more provocative than Walker. One can see precedents in his work both of 'Afrocentrism' and of the notion of African American 'cultural pathology' brought on by persistent white prejudice."―Bruce Dain, author of A Hideous Monster of the Mind:

"Together these essays, which are often in explicit conversation with one another, offer new understandings of Venture Smith and the history of race and slavery in the Atlantic world. Moreover, the volume works to inspire its readers to join the discussion. Editor James Brewer Stewart's inclusion of a facsimile reproduction of Smith's 1798 Narrative and Maryilyn Nelson's two haunting poems, which bookend the volume, invite readers to meditate for themselves on the porous boundaries between humanity and capital that marked the lives of all enslaved people in the eighteenth-century Atlantic world, but perhaps especially that of Venture Smith."―The Journal of Southern History

1. To Heal the Scourge of Prejudice: The Life and Writings of Hosea Easton [Paperback] Easton, Hosea; Price, George and Stewart, James

2. TO HEAL THE SCOURGE OF PREJUDICE

3. To Heal the Scourge of Prejudice: The Life and Writings of Hosea Easton