Items related to The African-American Soldier: From Crispus Attucks...

The African-American Soldier: From Crispus Attucks to Colin Powell 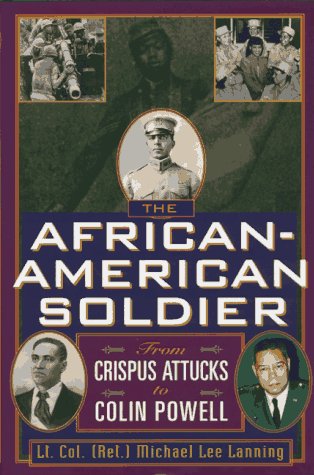 Offers a comprehensive overview of African-American soldiers and the part they have played in the military and American history over the course of the past two hundred years.

A survey of the attempts by African-Americans to serve their country in an often reluctant military Lt. Col. (Ret.) Lanning (Vietnam at the Movies, 1995, etc.) traces the major contributions of black soldiers and sailors, beginning with the 5,000 who served in the Revolutionary War and carrying the narrative forward to their successors in Desert Storm. He notes that blacks sailed with John Paul Jones and fought in the war of 1812. When the Civil War started, Lincoln didn't recruit black soldiers because he feared it would drive slave-holding border states into the Confederacy. The first black regiment was formed in the free state of Kansas in 1862 to fight the feared Confederate guerilla chief Quantrill. In all, some 200,000 blacks served in Union armies, such as the gallant 54th and 55th Massachusetts black regiments, despite the special danger they faced (many expected that, if captured, they would be enslaved or executed). Thirty-eight thousand died. Several received the Medal of Honor. African-Americans served alongside the Rough Riders at San Juan Hill. In the navy, African-Americans were limited to serving as laborers, cooks, and mess attendants until Franklin Roosevelt forced the service to allow black sailors to try to obtain all ratings. On July 26, 1948, President Truman ended segregation in the armed services by executive order. Despite slow progress, racial prejudices and clashes still occurred, especially when black troops were transferred to southern camps. Lanning believes that, following many years of struggle and the pivotal experience of Vietnam, the army is now the most integrated institution in the US. A vivid history revealing the extraordinary bravery and crucial roles of blacks in the American military. (photos, not seen) -- Copyright ©1997, Kirkus Associates, LP. All rights reserved.

Lanning, an experienced military writer and retired army officer, provides a good overview of African Americans' military service to their country, a service that started with the American Revolution. Leaving the reader to learn the social and political background from the books listed in the bibliography, he offers a primarily narrative history, and an excellent one, even when it recounts events that make the blood boil. But it has some compensatory pleasant surprises in it, too, such as the comparatively rapid and painless integration of the Marine Corps during the Korean conflict. Overall, it may offer little to seasoned students of African American or military history, yet it is an invaluable resource for those with limited knowledge and a slightly whitewashed (so to speak) view of U.S. military history. What is now needed to finish curing such racial myopia is comparable volumes on other ethnic minorities in uniform, starting with Latinos and Native Americans. Roland Green

1. The African-American Soldier: From Crispus Attucks to Colin Powell

2. The African-American Soldier: From Crispus Attucks to Colin Powell

3. The African-American Soldier: From Crispus Attucks to Colin Powell

4. The African-American Soldier: From Crispus Attucks to Colin Powell