Items related to The Forewarned Investor: Don't Get Fooled Again...

The Forewarned Investor: Don't Get Fooled Again by Corporate Fraud 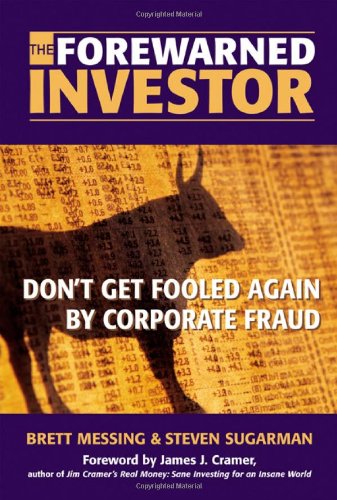 While there have been many great investment books written about how to identify winning stock ideas, there are few that explain how to dodge the losers. It's a crucial lesson to learn. The capitalist system regularly produces characters so destructive that they shake the nation's financial system to its very foundation. The losses these rogues generate extend well beyond those incurred by company stakeholders. Corporate scandals sap investor confidence, savage the stock market, and often deal a blow to the whole economy. The Forewarned Investor identifies common manifestations of fraud visible to investors. The presence of a number of these danger signs should alert investors that the risk level associated with investing in a specific company's stock is elevated, and it is incrediby probable if something is amiss. When an investor encounters a collection of these danger signs, he should follow the lead of a poker player with a lousy hand and fold.

"The Forewarned Investor explains—in plain English—how to protect yourself, teaching the kind of lessons you and I both need to have on hand before we commit to owning any stock."

Brett S. Messing is the Managing Partner of GPS Partners, an investment management firm specializing in income-oriented securities. He was previously a Managing Director at Lehman Brothers. Mr. Messing has contributed to Fortune magazine and appears regularly on CNBC. He is a graduate of Harvard Law School and Brown University and lives in Los Angeles, California with his wife, Marla, and three daughters, Natalie, Samantha, and Morgan.

Steven A. Sugarman is a Partner of GPS Partners. He previously worked with Mr. Messing at Lehman Brothers where he was primarily responsible for the management of income-oriented investments. Mr. Sugarman began his career as a management consultant at McKinsey & Company. He is a graduate of the Yale Law School and Dartmouth College and lives in Santa Monica, California with his wife, Ainslie, and his daughter, Sierra.

1. The Forewarned Investor: Don't Get Fooled Again by Corporate Fraud

2. The Forewarned Investor: Don't Get Fooled Again by Corporate Fraud

6. The Forewarned Investor: Don't Get Fooled Again by Corporate Fraud