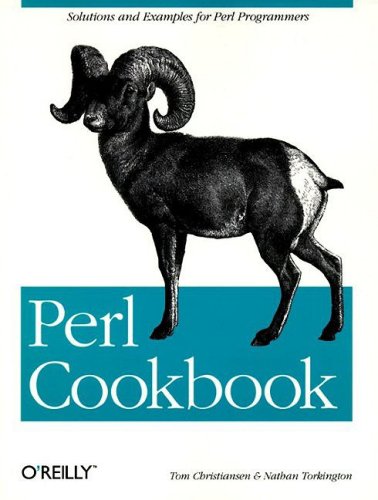 The Perl Cookbook is a comprehensive collection of problems, solutions, and practical examples for anyone programming in Perl. Topics range from beginner questions to techniques that even the most experienced of Perl programmers will learn from. More than just a collection of tips and tricks, the Perl Cookbook is the long-awaited companion volume to Programming Perl, filled with previously unpublished Perl arcana.The Perl Cookbook contains thousands upon thousands of examples ranging from brief one-liners to complete applications. Covered topic areas spread across nearly four hundred separate "recipes," including:

These recipes were rigorously reviewed by scores of the best minds inside and outside Perl, foremost of which was Larry Wall, the creator of Perl himself.The Perl Cookbook is written by Tom Christiansen, Perl evangelist and coauthor of the bestselling Programming Perl and Learning Perl; and Nathan Torkington, Perl trainer and co-maintainer of the Perl Frequently Asked Questions list.

When the second edition of Programming Perl was released, the authors omitted two chapters: "Common Tasks with Perl" and "Real Perl Programs." Publisher O'Reilly & Associates soon realized that there would be too many pages in Programming Perl if it put updated recipes in the new edition. Instead, O'Reilly chose to release the many Perl code examples as a separate entity: The Perl Cookbook.

The recipes are well documented and the examples aren't too arcane; even beginners will be able to pick up the lessons taught here. The authors write in relatively easy-to-understand language (for a technical guide). Through this book and its arsenal of recipes, you will learn many new things about Perl to help you through your toughest projects. The next time you're working on a project at 2 a.m., you'll thank yourself for the guidance and direction The Perl Cookbook provides. --Doug Beaver

Tom Christiansen is a freelance consultant specializing in Perl training and writing. After working for several years for TSR Hobbies (of Dungeons and Dragons fame), he set off for college where he spent a year in Spain and five in America, dabbling in music, linguistics, programming, and some half-dozen different spoken languages. Tom finally escaped UW-Madison with B.A.s in Spanish and computer science and an M.S. in computer science. He then spent five years at Convex as a jack-of-all-trades working on everything from system administration to utility and kernel development, with customer support and training thrown in for good measure. Tom also served two terms on the USENIX Association Board of directors. With over fifteen years' experience in UNIX system administration and programming, Tom presents seminars internationally. Living in the foothills above Boulder, Colorado, surrounded by mule deer, skunks, and the occasional mountain lion and black bear, Tom takes summers off for hiking, hacking, birding, music making, and gaming.

Nathan Torkington is a banjo player, father, and husband. His crimes in the computing community include: coauthor of the Perl Cookbook, editor for O'Reilly and Associates, content coordinator for the Open Source Convention and Perl Conference, and project manager for perl6.