Items related to Altered States: A Reader in the New World Order

Altered States: A Reader in the New World Order

Altered States: A Reader in the New World Order 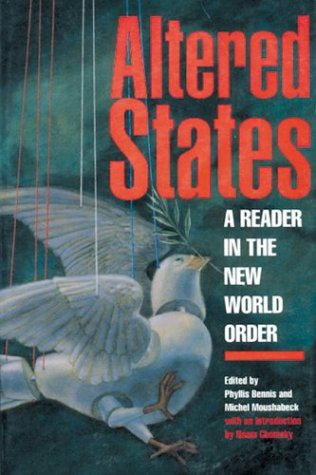 Warning against "a dangerously lopsided unipolarity" as a result of post-Soviet American hegemony, editors Bennis and Moushabeck ( Beyond the Storm: A Gulf Crisis Reader ) have compiled some 50 bracing essays from left-leaning academics and journalists. Though a few essays are ponderous, most are quite accessible. Marcus Raskin, calling for debate on the future of the CIA, exhorts the government not to "mistake paranoia for intelligence." Yvonne Yazbeck Haddad criticizes the United States's Middle East policy as a continuation of 19th-century colonialism. In an intriguing revision of some accepted wisdom, Mary Kaldor argues that the new nationalism in Europe is a consequence of the Cold War. Others offer uncommon insights: Tatiana Vorozheikina observes that Soviet internationalism has been replaced by an absence of Russian concern for the Third World; Joseph Diescho notes that the government of newly independent Namibia has had to collaborate with past economic exploiters just to survive. Though a few essays, like those on Haiti and Cambodia, are dated, the book is a salutary, if pessimistic, collection of warnings.
Copyright 1993 Reed Business Information, Inc.

"No other work known to me covers as comprehensively and critically world politics after the Cold War...a unique compendium of dissenting voices..." -- Eqbal Ahmad

1. Altered States: A Reader in the New World Order