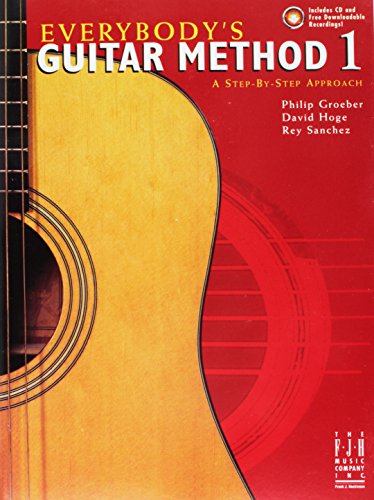 Everybody's Guitar Method, Book 1 is a step-by-step approach for contemporary guitar students of all ages. Single-note playing is well-paced and provides students with an enjoyable excursion to solo playing. Basic notation is reinforced throughout the book, furnishing students with solid building blocks for retention. Chords are introduced with examples that are easy-to-play. This pedagogically sound method includes new music and arrangements that are fun for both students and teachers. The music encompasses a wide variety of musical styles: rock, blues, folk, jazz, country, and classical. A beautifully orchestrated play-along CD completes this innovative method with numerous outstanding musical settings that compliment the mood of each piece. The suggested tempi may be used once the important skills of accurate note playing and rhythm have been achieved.

Philip W. Groeber holds a degree in theory and composition from the University of Miami, Florida, as well as a degree from the University of Cincinnati. Former guitar teachers include Claire Callahan and Juan Mercadal. He is proficient in a variety of musical styles ranging from orchestral and musical theater to jazz and rock, and has performed professionally as a guitarist, pianist, bassist, and musical director. An active teacher throughout his career, Philip also has extensive experience in the music publishing industry as a composer, arranger, editor, and production manager.

David Hoge studied with John Sutherland at the University of Georgia, where he earned his degree in classical guitar performance. He also studied with Bruce Holzman at Florida State University. For many years, David has been the owner and lead teacher of David Hoge Guitar Studios in Tallahassee, Florida, and in Atlanta and Athens, Georgia. He has taught both private and group lessons to hundreds of guitar students throughout the Southeast. In addition, David has worked extensively in the music publication industry and is a founding member of the Classical Guitar Society of Tallahassee.

Rey Sanchez is an educator, producer, songwriter and guitarist. He holds degrees in Music Theory/Composition and Studio Writing/Production from the University of Miami where he serves as Chair of the Department of Music, Media and Industry. Rey also directs the Bruce Hornsby Creative American Music Program, an innovative performing-songwriting program at the Frost School of Music. He is actively involved as a songwriter, publisher and producer, working with EMI Music Publishing, Sony BMG, Universal Music and others. He served as Director of Guitar Publications for Columbia Pictures Publications and is a voting member of the Recording Academy. Rey was also the long-time Musical Director for Latin superstar Chayanne.