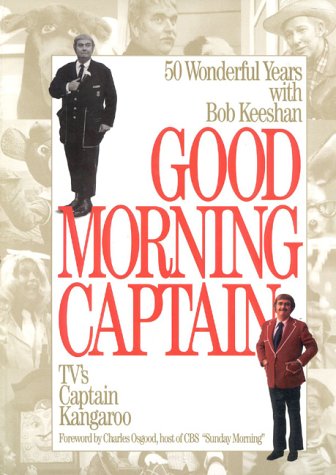 A lavish photo history and intimate look at the career of Bob Keeshan, TV's Captain Kangaroo.

There aren't enough superlatives to describe this wonderful reminiscence from the man who brought enjoyment to millions of children through his innovative show, which debuted during the golden age of television. From 1955 to 1993 (the year of the show's final broadcast on PBS), Keeshan, in the role of Captain Kangaroo, entertained, educated, and shared his gentle brand of wisdom. This is a loving look at the full run of the show and its supporting cast. Separate chapters are devoted to Mr. Green Jeans (the versatile farmer), Gus Allegretti (the puppeteer for Bunny Rabbit and other characters), Ruth Manecke (the zoologist who introduced many animals to the show), guest stars (from Walter Cronkite to Minnie Pearl), the production staff, and Keeshan himself. Beautiful photos, thoughtful captions, and a genial text with a nice blend of facts and anecdotes make this an exceptional presentation. Without preaching or moralizing, Keeshan stresses his belief in creative, nonviolent, value-based educational entertainment for kids. Obviously, his approach was a winner?and so is his book. For circulating libraries.?Carol J. Binkowski, Bloomfield, N.J.
Copyright 1997 Reed Business Information, Inc.