Items related to So Long a Letter

Mariama Ba So Long a Letter 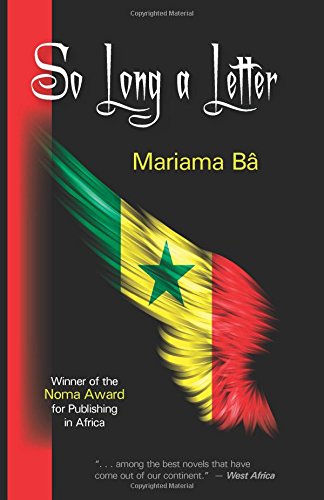 Written by award-winning African novelist Mariama Ba and translated from the original French, So Long a Letter has been recognized as one of Africa's 100 Best Books of the 20th Century. The brief narrative, written as an extended letter, is a sequence of reminiscences—some wistful, some bitter—recounted by recently widowed Senegalese schoolteacher Ramatoulaye Fall. Addressed to a lifelong friend, Aissatou, it is a record of Ramatoulaye's emotional struggle for survival after her husband betrayed their marriage by taking a second wife. This semi-autobiographical account is a perceptive testimony to the plight of educated and articulate Muslim women. Angered by the traditions that allow polygyny, they inhabit a social milieu dominated by attitudes and values that deny them status equal to men. Ramatoulaye hopes for a world where the best of old customs and new freedom can be combined.

Considered a classic of contemporary African women's literature, So Long a Letter is a must-read for anyone interested in African literature and the passage from colonialism to modernism in a Muslim country.

Winner of the prestigious Noma Award for Publishing in Africa.

“This is a beautiful new edition of a timeless classic of African literature. Ba brings the issue of polygamy into sharp, almost familiar focus for readers who might think it bizarre and safely foreign. I am pleased to see this treasure back in print.” Catherine E. Bolten, University of Notre Dame

“I used this novel in my African literature course and it was great. The students researched Senegal and the discussions were lively, enthusiastic, and compelled the quiet students to join in. It was a rewarding experience.” Immaculate Kizza, University of Tennessee

Mariama Ba catapulted onto the African literary scene with her first novel, 'So Long a Letter', which received much acclaim and admiration. The Senegalese writer who was born in Dakar, Senegal, in 1929, was educated - unlike many other women of her generation - at the Ecole Normal for girls in Rufisque. Brought up as a Muslim by maternal grandparents, she studied the Koran during school holidays.Ba began writing at school and in her early essays there are hints at the critical approach that she was to adopt in her writings to society around her. A pioneer of women's right, she became involved in several Senegalese women's organisations. Her commitment to eradicating inequalities between men and women in Africa led her to write So Long A Letter. The novel, originally written in French, was translated into sixteen languages and won the first Noma Award for Publishing in Africa. The English translation of the novel was first published in 1981. A school teacher and inspector by profession, Ba promoted the crucial role of the writer in a developing country. She believed that the 'sacred mission' of the writer was to strike out 'at the archaic practices, traditions and customs that are not a real part of our precious cultural heritage.' So Long a Letter succeeds admirably in its mission. Ba died tragically in 1981 in Dakar after a long illness, just before her second novel appeared.

So Long a Letter (Paperback)

So Long a Letter (Paperback)