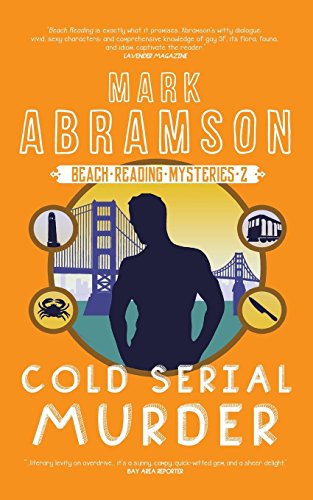 Tim Snow expected to show his visiting Aunt Ruth the wonders of San Francisco, but never expected one of the sights of the city would be the body of his ex-lover. A killer is on the loose in the Castro district. Meanwhile, Tim's cadre of quirky friends and neighbors makes life all the more interesting with their drama of weddings and lost (and found) loves. Cold Serial Murder continues the story of one of the Castro's most adorable characters. Can Tim and his Aunt uncover who the killer is before it's too late?

A San Francisco Chronicle best-selling author, Mark Abramson was once a Midwestern farm boy who joined the great gay migration to San Francisco in the 1970s. His writing has appeared in the gay press as far back as Christopher Street, Fag Rag, Gay Sunshine, and more recently in Lethe Press' acclaimed anthology Charmed Lives.
In addition to writing the Beach Reading series, he is also editing a memoir, Castro Street Diaries recounting true tales from the great gay Mecca before AIDS.