Items related to Grand Unified Theorem: Discovery of the Theory of Everything...

Gabriel A. Oyibo Grand Unified Theorem: Discovery of the Theory of Everything and the Fundamental Building Block of Quantum Theory

Grand Unified Theorem: Discovery of the Theory of Everything and the Fundamental Building Block of Quantum Theory 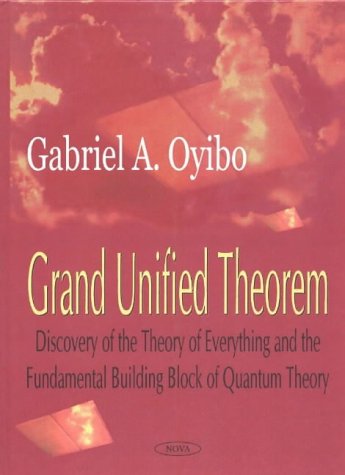 General theorem providing a mathematical basis for a Grand Unified Field Theory or a Theory of Everything (TOE) is presented. The Grand Unified Theorem produces a set of unified field equations from which Yang-Mills equations, other physical equations, and in general, mathematical equations, which have ever been known to human beings, can be recovered. The solution seems to mathematically represent the modification of space-time structure predicted by Einstein's general relativity theory. A good part of the material presented in this work has been reviewed by the American Mathematical Society and the European Mathematical Society in the Zentralblatt fur Mathematik.