Items related to Contrails Over the Mojave: The Golden Age of Jet Flight...

George J. Marrett Contrails Over the Mojave: The Golden Age of Jet Flight Testing at Edwards Air Force Base

Contrails Over the Mojave: The Golden Age of Jet Flight Testing at Edwards Air Force Base 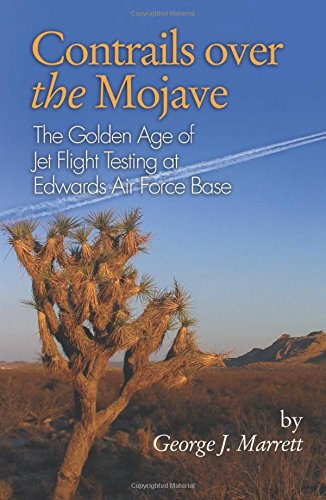 In Contrails over the Mojave, Marrett takes off where author Tom Wolfe's The Right Stuff ended in 1963. Marrett started the Air Force Test Pilot School at Edwards AFB only two weeks after the school's commander, Col. Chuck Yeager, ejected from a Lockheed NF-104 trying to set a world altitude record. He describes life as a space cadet experiencing 15 Gs in a human centrifuge, zero-G maneuvers in a KC-135 'Vomit Comet,' and a flight to 80,000 feet in a Lockheed F-104A Starfighter. After graduating from Yeager's 'Charm School,' he was assigned to the Fighter Branch of Flight Test Operations for three years. There he flew the Air Force's latest fighter aircraft and chased other test aircraft like the X-15 rocket ship and the XB-70A Valkyrie as they set world speed and altitude records.

Marrett takes you into the cockpit with him going vertical in a T-38 Talon, high-G maneuvering in an F-4C Phantom and wet runway landing tests in the accident-prone F-111A Aardvark. Marrett relives stories of crashes when his test pilot friends were killed. He writes about Air Force test pilot Col. 'Silver Fox' Stephens setting a world speed record in the YF-12 Blackbird and Lockheed test pilot Bob Gilliland flying a single-engine, minimum-control speed stall in the SR-71 spy plane. He recounts dead-sticking a T-38 to a landing on Rogers Dry Lake after a twin-engine failure and conducting dangerous tail hook barrier testing in a fighter jet without a canopy. Marrett also writes about a UFO sighting in the night sky above the Mojave Desert, a mysterious sighting now referred to as 'The Edwards Encounter.'

George J. Marrett flew 188 combat missions in the Douglas A-1 Skyraider in Vietnam and tested more than forty types of military aircraft in twenty-five years as a test pilot for the Air Force and Hughes Aircraft Company. He is a member of the Society of Experimental Test Pilots and of the Board of Trustees, National Test Pilot School, Mojave, California. He is the author of Howard Hughes: Aviator; Cheating Death: Combat Air Rescues in Vietnam and Laos; and Testing Death: Hughes Aircraft Test Pilots and Cold War Weaponry. Now retired, he lives in Atascadero, California.

George Marrett has done it again! Contrails over the Mojave: The Golden Age of Jet Flight Testing at Edwards Air Force Base is a must have book for every lover of aviation. Marrett writes as well as he flew, which is to say with authority, accuracy, punch and color! The wonderful thing about Marrett is the amazing way he puts you in the cockpit of a complex Mach 2 aircraft and makes you understand just how far he is pushing the envelope. He peals back the layers of his fellow test pilot s personalities, exposing them as they really were: dedicated, fearless scientists, always ready to push the envelope, but doing it the right way the Edwards way. --Col. Walter J. Boyne, USAF (Ret.) Author of the Smithsonian Book of Flight, former Director of the Smithsonian s National Air & Space Museum and a Member of the National Aviation Hall of Fame

1. Contrails Over the Mojave: The Golden Age of Jet Flight Testing at Edwards Air Force Base

2. Contrails Over the Mojave: The Golden Age of Jet Flight Testing at Edwards Air Force Base