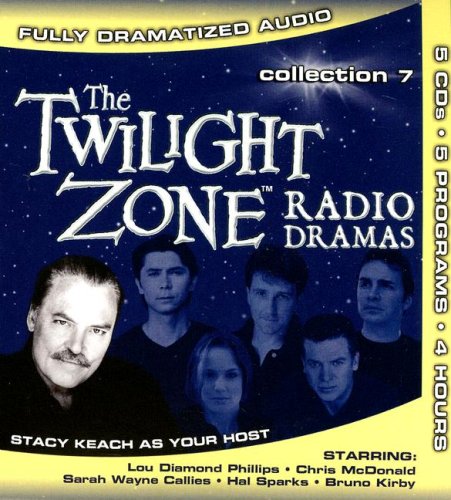 Adapted for audio from original scripts written for the television show created by Rod Serling that aired in the 1960s, these radio dramas feature music and sound effects and a distinguished lineup of guest stars. Serling's widow, Carol Serling, praised the radio adaptations, calling them "truly astounding." Collection 7 Miniature--starring Lou Diamond Phillips A shy bachelor discovers a miniature doll apparently alive inside a 19th century dollhouse. Fascinated, he whiles away the hours peering into this little world and wishing he were part of it. Ring-A-Ding-Girl--starring Sarah Wayne Callies Movie star Bunny Blake makes an unexpected visit to her hometown after receiving a strange ring that predicts the future. Long Distance Call--starring Hal Sparks Before Grandma died, she gave her Grandson Billy a toy telephone. When he uses it to talk to her, his parents dismiss it as an overactive imagination--until Billy decides its time to join his Grandma. The Last Night of a Jockey--Bruno Kirby A down-and-out jockey years to be a giant of a man so that everyone would look up to him--he just may get his wish. Night of the Meek--starring Chris McDonald Henry Corwin, a down-at-the-heels department store Santa, dispenses Christmas cheer to a mission house with the help of a sack that will produce whatever one asks for.