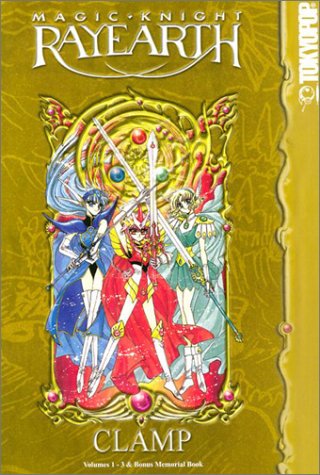 Ten years ago the manga creation team CLAMP took Japan by storm with their hit series Magic Knight Rayearth. Five years later, Rayearth became TOKYOPOP's debut manga series, introducing the creative force of CLAMP to thousands of new readers. Now, CLAMP manga series are the top-selling graphic novels in America. To celebrate this seminal shojo manga series' 10th anniversary, TOKYOPOP is relaunching the six-volume series as part of its 100% Authentic Manga line. Featuring improved image quality, a new edit, and a new design, the new Rayearth is a must-have collection for old fans and new. Individual volumes will be available in March of 2003, but this special boxed set of the first three volumes is coming out just in time for the holidays. This limited edition boxed set also includes a bonus 64-page memorial book, featuring color comics and artist information not available anywhere else! Magic Knight Rayearth is the story of Hikaru, Umi, and Fuu, three junior-high schoolgirls who are transported to the magical world of Cephiro. In order to save that world from destruction they must face fearsome opponents, make loyal new friends, and unlock the power of the Magic Knights that lies within each of their hearts.