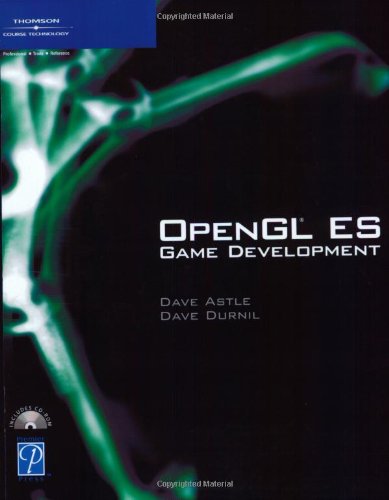 OpenGL ES Game Development provides an in-depth look into the new OpenGL ES standard and what the new embedded systems graphics library will provide for game developers. It compares OpenGL ES to OpenGL, EGL (the new standard windowing APIs for OpenGL ES), game development, and platforms that are currently available. It also provides coverage of the problems involved in mobile game development with OpenGL ES. Additional coverage includes an overview of fixed point math and other areas of cell phone limitation that game developers need to consider before they write mobile games. The authors walk the reader through the steps required to develop a game on multiple mobile platforms, which is the process involved with distributing their game via carriers. This book is ideally suited for readers who have some experience either in making games or in developing applications for cell phones, and who are comfortable with C++ and OpenGL's core features.

Dave Astle received his bachelor's degree in Computer Science from the University of Utah, where he specialized in graphics, artificial intelligence, networking, and compiler theory and design. He has been programming games professionally for several years, and is currently a senior engineer in the Gaming and Graphics
group at QUALCOMM Inc. He is the cofounder and Executive Producer of GameDev.net, the leading online community for game developers. He is the co-author of OpenGL Game Programming, has contributed to several other game development books, and has spoken at industry conferences, including the Game
Developers Conference. When not absorbing radiation from his monitor, Dave enjoys music, reading, skating, collecting rhinos (not real ones? yet), and playing with his five kids. He lives in San Diego, California.