Items related to The Nazi Census: Identification and Control in the... 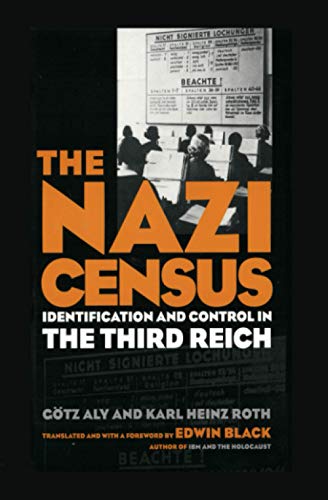 The Nazi Census documents the origins of the census in modern Germany, along with the parallel development of IBM machines that helped first collect data on Germans, then specifically on Jews and other minorities. Gotz Aly and Karl Heinz Roth begin by examining the history of statistical technology in Germany, from the Hollerith machine in the 1890s through the development and licensing of IBM punch-card technology. Aly and Roth explain that census data was collected on non-Germans in order to satisfy the state's desire to track racial groups for alleged security reasons. Later this information led to disastrous results for those groups and others that were tracked in similar ways. Ultimately, as Gotz Aly and Karl Heinz Roth point out in this short, rigorously researched book, the techniques the Nazis employed to track, gather information, and control populations initiated the modern system of citizen registration. Aly and Roth argue that what led to the devastating effects of the Nazi census was the ends to which they used their data, not their means. It is the employment of methods of collection that the authors examine historically as it applies to the Nazi regime, and also the way contemporary methods of classification and control still affect the modern world. With a riveting Introduction and translation from Edwin Black, NYT bestselling author of IBM and the Holocaust.

"Originally published in 1984, this controversial study challenges census-taking by examining how the Hitlerian regime pioneered both the concepts and the processes of modern statistics-gathering about populations. No reader of this fascinating study can fail to be moved by the coldly bureaucratic thoroughness and mechanical efficiency with which the Nazis went about their business of targeting Jews, Gypsies, and other socially or biologically unwanted segments of German society." —Michael R. Marrus, Chancellor Rose and Ray Wolfe Professor of Holocaust Studies, University of Toronto

3. The Nazi Census: Identification and Control in the Third Reich

4. The Nazi Census: Identification and Control in the Third Reich (Politics, History, and Social Change)