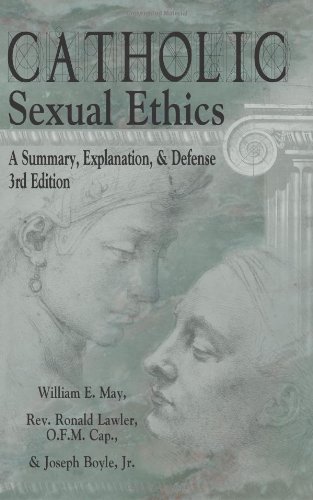 The authoritative work on the Church's teaching on sexual morality has been thoroughly updated to address dimensions of this complex topic that have emerged in the late 20th and early 21st centuries.

Since publication of the 2nd edition of Catholic Sexual Ethics, the philosophical landscape of human sexuality has dramatically changed. The rise of such concerns as moral relativism, the drive for same-sex unions, and a drastic redefinition of marriage and family have underscored the need for an unambiguous, up-to-date understanding of Catholic sexual teaching.

Features:
---Quotations from the Catechism of the Catholic Church.
---Summary of Catholic teaching on sexuality from biblical times to our own.
---Presentation of principal elements of the teaching of Pope Benedict XVI on marriage in the early years of his pontificate.
---Discussion of the Congregation for the Doctrine of the Faith's 2003 Considerations Regarding Proposals to Give Legal Recognition to Unions Between Homosexual Persons.
---Integration of more recent materials that clarify issues into the existing framework of the book.

Whether they are involved in ministry, education, or catechesis, you and many others will benefit from having this essential resource near at hand.

William E. May is emeritus professor of moral theology at the Pontifical John Paul II Institute for Studies on Marriage and Family at The Catholic University of America and senior fellow for the Culture of Life Foundation. He is the author of An Introduction to Moral Theology, 2nd Edition (Our Sunday Visitor 2003) and Catholic Bioethics and the Gift of Human Life, 2nd Edition (Our Sunday Visitor 2008). From 1986-1996, he was a member of the International Theological Commission at the appointment of Pope John Paul II.

Father Ronald Lawler, O.F.M. Cap. (1926-2003), was the director of adult and family religious education for the Diocese of Pittsburgh and adjunct professor of theology at Franciscan University of Steubenville. He co-authored the acclaimed catechism The Teaching of Christ, 5th Edition (Our Sunday Visitor).

Book Description Paperback. Condition: New. 3rd. Paperback. Previous ed. entered under Lawler, Ronald David, 1926-.Shipping may be from multiple locations in the US or from the UK, depending on stock availability. 352 pages. 0.454. Seller Inventory # 9781592760831