Items related to The Bed of Procrustes: Philosophical and Practical...

The Bed of Procrustes: Philosophical and Practical Aphorisms 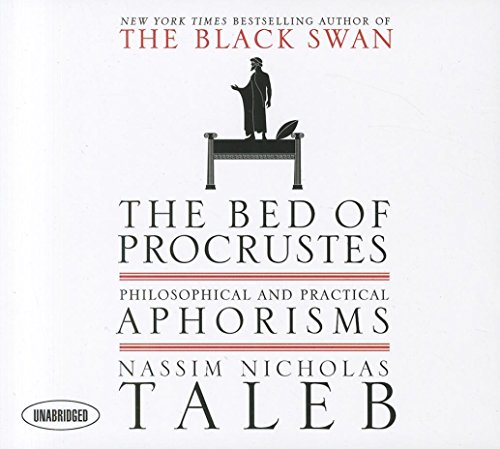 By the author of the modern classis The Black Swan, this collection of aphorisms and meditations expresses his major ideas in ways you least expect.

The Bed of Procrustes takes its title from Greek mythology: the story of a man who made his visitors fit his bed to perfection by either stretching them or cutting their limbs. It represents Nassim Nicholas Taleb's view of modern civilization's hubristic side effects-modifying humans to satisfy technology, blaming reality for not fitting economic models, inventing diseases to sell drugs, defining intelligence as what can be tested in a classroom, and convincing people that employment is not slavery.

Playful and irreverent, these aphorisms will surprise you by exposing self-delusions you have been living with but never recognized.

With a rare combination of pointed wit and potent wisdom, Taleb plows through human illusions, contrasting the classical values of courage, elegance, and erudition against the modern diseases of nerdiness, philistinism, and phoniness.

Nassim Nicholas Taleb spends most of his time as a flâneur, meditating in cafés across the planet. A former trader, he is currently Distinguished Professor of Risk Engineering at New York University. He is the author of Fooled by Randomness and The Black Swan, which has spent more than a year on the New York Times bestseller list and has become an intellectual, social, and cultural touchstone.

Counter Narratives The best revenge on a liar is to convince him that you believe what he said. - When we want to do something while unconsciously certain to fail, we seek advice so we can blame someone else for the failure. - It is harder to say no when you really mean it than when you don’t. Never say no twice if you mean it. - Your reputation is harmed the most by what you say to defend it. - The only objective definition of aging is when a person starts to talk about aging. - They will envy you for your success, for your wealth, for your intelligence, for your looks, for your status—but rarely for your wisdom. - Most of what they call humility is successfully disguised arrogance.

If you want people to read a book, tell them it is overrated. - You never win an argument until they attack your person. - Nothing is more permanent than “temporary” arrangements, deficits, truces, and relationships; and nothing is more temporary than “permanent” ones. - The most painful moments are not those we spend with uninteresting people; rather, they are those spent with uninteresting people trying hard to be interesting. - Hatred is love with a typo somewhere in the computer code, correctable but very hard to find. I wonder whether a bitter enemy would be jealous if he discovered that I hated someone else. - The characteristic feature of the loser is to bemoan, in general terms, mankind’s flaws, biases, contradictions, and irrationality—without exploiting them for fun and profit. - The test of whether you really liked a book is if you reread it (and how many times); the test of whether you really liked someone’s company is if you are ready to meet him again and again—the rest is spin, or that variety of sentiment now called self-esteem. - We ask “why is he rich (or poor)?” not “why isn’t he richer (or poorer)?” “why is the crisis so deep?” not “why isn’t it deeper?” Hatred is much harder to fake than love. You hear of fake love; never of fake hate. - The opposite of manliness isn’t cowardice; it’s technology. - Usually, what we call a “good listener” is someone with skillfully polished indifference. - It is the appearance of inconsistency, and not its absence, that makes people attractive. - You remember emails you sent that were not answered better than emails that you did not answer. People reserve standard compliments for those who do not threaten their pride; the others they often praise by calling “arrogant.” - Since Cato the Elder, a certain type of maturity has shown up when one starts blaming the new generation for “shallowness” and praising the previous one for its “values.” - It is as difficult to avoid bugging others with advice on how to exercise and other health matters as it is to stick to an exercise schedule. - By praising someone for his lack of defects you are also implying his lack of virtues. - When she shouts that what you did was unforgivable, she has already started to forgive you. Being unimaginative is only a problem when you are easily bored. - We call narcissistic those individuals who behave as if they were the central residents of the world; those who do exactly the same in a set of two we call lovers or, better, “blessed by love.” -

1. The Bed of Procrustes: Philosophical and Practical Aphorisms