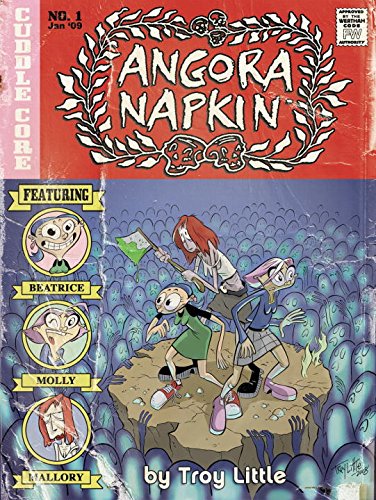 Three time Eisner nominee and Xeric recipient, Troy Little began a career in animation after graduating college and In 2000 he began self-publishing his comic series Chiaroscuro which garnered him both a Xeric and PEICA grant and was eventually collected by IDW Publishing and published in 2007. His second book, Angora Napkin was published in 2009 with IDW and was nominated for the prestigious Eisner Award (Best Publications for Teens) in 2010. Angora Napkin was also developed as an animated pilot for Teletoon, Canada and was broadcast Halloween night in 2010. Angora Napkin: The Golden McGuffin, the weekly web serial was launched in 2012 and Angora Napkin: Harvest of Revenge was published by IDW in 2013 and nominated for an Eisner as well (Best Lettering). In 2013 Troy took on The Powerpuff Girls re-launch as series writer/artist/colourist. In 2014 he began adapting Hunter S. Thompson’s cult classic novel Fear & Loathing in Las Vegas for IDW / Top Shelf and was published in October, 2015. It was nominated for an Eisner and also won a Gold PubWest Book Design Award. Troy lives in Charlottetown, Prince Edward Island with his twin daughters Alicen, Hayden and son Nathan. He is married to comic artist Brenda Hickey.