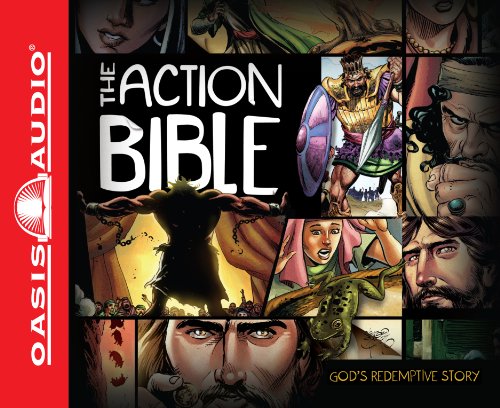 Original action heroes found here!  The Action Bible includes over 200 fast-paced narratives in chronological order, making it easy to follow the Bible’s historical flow— and reinforcing the buildup to its thrilling climax. The stories in The Action Bible communicate biblical truth clearly and forcefully to contemporary listeners. This compelling blend of clear writing plus dramatic voice characterization offers an appeal that crosses all age boundaries. Let this epic rendition draw you into all the excitement of the world’s most awesome story.

Sergio Cariello was born in Brazil in 1964 and started drawing as soon as could hold a pencil.  At the age of five, he already knew that he wanted to be a cartoonist.  And so did everyone else--he drew on church bulletins, napkins, and every surface wtihin his reach.  He currently resides in Holiday, Florida.

Sergio has worked for Marvel Comics and DC Comics.  He attended the Joe Kubert School of Cartoon and Graphic Art as well as the Word of Life Bible Institute in upstate New York.