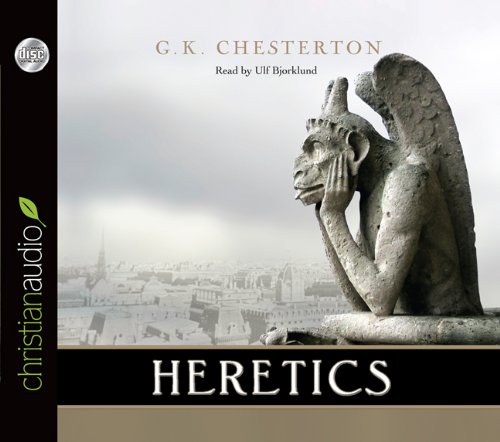 Nothing more strangely indicates an enormous and silent evil of modern society than the extraordinary use which is made nowadays of the word "orthodox". In former days the heretic was proud of not being a heretic. It was the kingdoms of the world and the police and the judges who were heretics. He was orthodox. He had no pride in having rebelled against them; they had rebelled against him. The armies with their cruel security, the kings with their cold faces, the decorous processes of State, the reasonable processes of law--all these like sheep had gone astray. The man was proud of being orthodox, was proud of being right. If he stood alone in a howling wilderness he was more than a man; he was a church. He was the centre of the universe; it was round him that the stars swung. All the tortures torn out of forgotten hells could not make him admit that he was heretical. But a few modern phrases have made him boast of it. He says, with a conscious laugh, "I suppose I am very heretical," and looks round for applause. The word "heresy" not only means no longer being wrong; it practically means being clear-headed and courageous. The word "orthodoxy" not only no longer means being right; it practically means being wrong. All this can mean one thing, and one thing only. It means that people care less for whether they are philosophically right. For obviously a man ought to confess himself crazy before he confesses himself heretical. The Bohemian, with a red tie, ought to pique himself on his orthodoxy. The dynamiter, laying a bomb, ought to feel that, whatever else he is, at least he is orthodox. -- Gilbert K. Chesterson

GILBERT KEITH CHESTERTON was born in London, England on the 29th of May, 1874. Though he considered himself a mere “rollicking journalist,” he was actually a prolific and gifted writer in virtually every area of literature. A man of strong opinions and enormously talented at defending them, his exuberant personality nevertheless allowed him to maintain warm friendships with people—such as George Bernard Shaw and H. G. Wells—with whom he vehemently disagreed. Chesterton died on the 14th of June, 1936 in Beaconsfield, Buckinghamshire, England. During his life he published 69 books and at least another ten based on his writings have been published after his death. Designed by Picture Book Apologetics picturebookapologetics.com/classics

Heretics is one of Chesterton s most important books. It is also one of his most neglected books. Perhaps the reason has to do with the title. The word heretic conjures up frightful images of controversial characters being barbecued for their beliefs. It smacks of intolerance. The very word dogmatic is perceived as being intolerant. But Chesterton says that man is the animal who makes dogmas. Trees have no dogmas. Turnips are singularly broad-minded. There is something ironic about tolerance being an ideal, and that it is connected to religious freedom. In reality, tolerance has done more to suppress religion than has any persecution. It has left us not only afraid to debate about our beliefs, it has made us afraid even to discuss them. As Chesterton says, We now talk about the weather, and call it the complete liberty of all creeds. This strange silence about religion leaves the impression that religion is not important. There is one thing that is infinitely more absurd and unpractical than burning a man for his philosophy. This is the habit of saying his philosophy does not matter, and this is done universally in the twentieth century... A man s opinion... on Botticelli matters; his opinion on all things does not matter. Chesterton says that we can t get away from the fact that we have a general view of existence, whether we like it or not. It affects and involves everything we say or do, whether we like it or not. And our general view of things is based on our ultimate view of things. Religion is never irrelevant. This book is not an attack but a defense, a defense of the ancient truths that are under attack by modern heretics. Chesterton claims to have gained a deeper appreciation of the Christian Faith through the simple exercise of defending it. He says he never realized the great philosophic common sense of Christianity until the anti-Christian writers pointed it to him. Heresy, it turns out, is usually a distinct lack of common sense. A heresy is at best a half-truth, but usually even less than that. A heresy is a fragment of the truth that is exaggerated at the expense of the rest of the truth. The modern world praises science and hygiene and progress. These are all very well and good, but they have been elevated at the expense of larger truths, such as faith and tradition and permanent ideals. In this book, Chesterton takes on George Bernard Shaw, H.G. Wells, and other heretics whose names may not be familiar, even if their heresies are still exceedingly familiar. The original objection to Heretics, which in fact compelled Chesterton to write Orthodoxy, is that his own criticisms of others were not to be taken seriously unless Chesterton himself declared what he stood for. This is perhaps why Heretics is considered the negative for which Orthodoxy is the positive. But any reasonable reader can see that Chesterton s criticisms are a defense of a well-defined position. By criticizing moral and artistic relativism, he is defending identifiable and absolute standards. By criticizing egoism and the cult of success, he is defending humility. By criticizing skepticism, morbidity and muddle-headedness, he is defending faith, hope, and clarity. Clarity. The truth which Chesterton is defending should be obvious. But because Chesterton has to defend it, it obviously isn t obvious. The heretics have obscured the truth, they have distracted us, they have won us over with lies. The first lie is that truth doesn t matter. --Dale Ahlquist, American Chesterton Society

Book Description christianaudio, 2011. Audio CD. Condition: Good. Connecting readers with great books since 1972. Used books may not include companion materials, some shelf wear, may contain highlighting/notes, may not include cdrom or access codes. Customer service is our top priority!. Seller Inventory # S_281295383