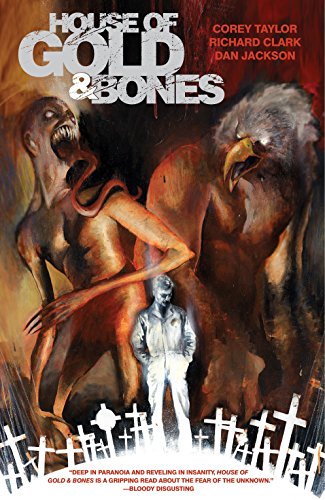 In a nightmarish world, the Human finds himself at a crossroads as wild adventure ensues and he's thrust into a morphing landscape of rolling hills, dense forest, and an ominous Crimson City. Chased by a crazed mob and mysterious characters neither friend nor foe, the Human takes an unexpected journey that will lead to his salvation... or damnation. Stone Sour/Slipknot singer Corey Taylor has written this graphic novel to accompany the narrative of Stone Sour's two House of Gold & Bones albums!

Corey Taylor is the New York Times bestselling author of Seven Deadly Sins and A Funny Thing Happened on the Way to Heaven. The lead singer of the hard rock bands Slipknot and Stone Sour, Corey has earned eleven platinum records, forty-three gold records, and a Grammy Award.

A bio is not available for this author.

Dan Jackson is a writer, producer, and director of documentary television. He was the series producer of "Crash Files,"" Impact: Stories of" "Survival," "Monster House," and "Twister Sisters" and wrote and produced "Birth of the V-Rod," "Inside America's" "Military Academies," and" Legends: Stevie Ray Vaughan. "He lives in Los Angeles.