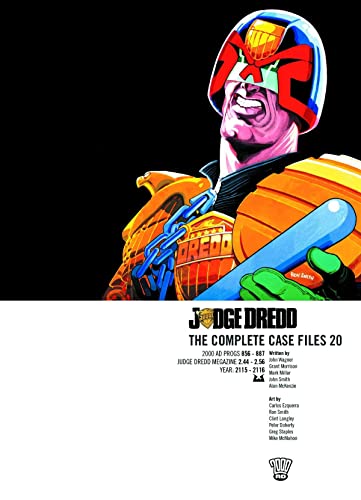 John Wagner has been scripting for 2000 AD for more years than he cares to remember. His creations include Judge Dredd, Strontium Dog, Ace Trucking, Al's Baby, Button Man and Mean Machine. Outside of 2000 AD his credits include Star Wars, Lobo, The Punisher and the critically acclaimed A History of Violence. Grant Morrison is one of the most successful ex-2000 AD writers, with a host of awards and a huge fan following. He began his career on Marvel UK's Zoids before coming to the Galaxy's Greatest Comic, where his strip Zenith became a fan-favourite. John Smith is unquestionably a 2000 AD hero, with a host of creative credits to his name, including A Love Like Blood, Devlin Waugh, Firekind, Holocaust 12, Indigo Prime, Pussyfoot 5, Revere, Slaughterbowl, Tyranny Rex, Leatherjack, Dead Eyes and Cradlegrave. Garth Ennis first came to prominence as writer on Troubled Souls, the Northern Ireland-set series he created with John McCrea for Crisis. Mark Millar is one of 2000 AD's most prolific story creators, with many co-creation credits including Babe Race 2000, Big Dave, and Slaughterbowl. Robbie Morrison was born in Helensburgh & brought up near Paisley, Scotland. Probably best known for the Eagle award-winning Nikolai Dante (co-created with Simon Fraser, additional art John Burns); serialised in UK SF comic 2000 AD since 1997 and collected as 11 Graphic Novels. Alan McKenzie worked for Marvel UK, editing Starburst, Cinema and Doctor Who Monthly magazines. He then wrote three non-fiction books, The Harrison Ford Story, Hollywood Tricks of the Trade and How to Draw and Sell Comic Strips before contributing comic scripts to 2000 AD. John Tomlinson worked at Marvel UK helping nurture various talents, including Matthew Bingham and John Freeman. He has co-written strips with Nick Abadzis. He was editor of 2000 AD from 1994 to 1996 and the Judge Dredd Megazine briefly in 1996. He also wrote several stories for 2000 AD.