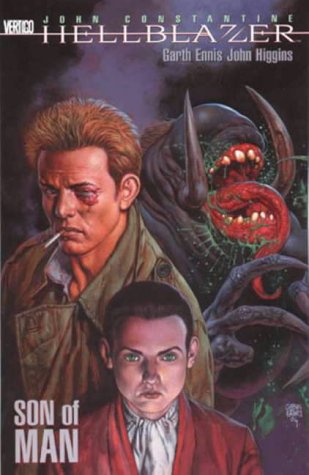 From Garth Ennis, the award-winning writer of Preacher, and acclaimed artist John Higgins (Sandman, Pride & Joy) comes another terrifying tale of the chain-smoking mystic, John Constantine. Constantine is visited by an old friend and suddenly his world is turned upside down as he is reminded of a dark deed he performed many years ago - which has now come back to haunt him. Soon South London mobsters and bent coppers are the least of his worries...Featuring a cover gallery by Glenn Fabry (Preacher, Just a Pilgrim) this is another peek beneath the filthy blanket of Constantine's supernatural and seedy London life.

Cynical sorcerer John Constantine practices the mystic arts and stirs up trouble in London's back alleys in the comic book Hellblazer. In this collection, his usual necromantic demimonde intersects with the criminal underworld when his hapless mate, Chas, is implicated in the botched murder of crime boss Harry Cooper's brother. As often happens, Constantine's past resurfaces to haunt him: 16 years ago, Cooper forced the young magician to raise his five-year-old son, Ronnie, from the dead. Now, just as Ronnie prepares to unleash an unimaginable evil upon the world, Constantine reenters the picture. This story arc reteams writer Ennis and artist Higgins, his collaborator on the crime-noir graphic novel Pride & Joy [BKL Mr 15 04]; Higgins' slightly cartoony art accentuates the tale's broad, over-the-top aspects but undermines its horrific elements. Still, the denouement and the fate of the gangsters are genuinely chilling. A prospective film based on hellblazer starts with two strikes against it--Keanu Reeves miscast as Constantine and transplantation to L.A.; prepare for boosted interest in his print adventures, anyway. Gordon Flagg
Copyright © American Library Association. All rights reserved

Book Description Titan Books Ltd, 2004. Condition: Good. Former Library book. Shows some signs of wear, and may have some markings on the inside. Seller Inventory # GRP117303096