Langteaux, James Alexander Gay Conversations with God: Straight Talk on Fanatics, Fags and the God Who Loves Us All

Gay Conversations with God: Straight Talk on Fanatics, Fags and the God Who Loves Us All 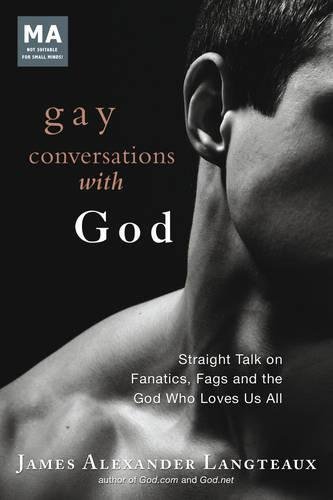 Representing a first in gay and Christian publishing, this provocative book presents a complete reversal of thought and action, contending that God loves homosexuals without attempting to refute scripture references. The study confronts its subject with a quirky sense of humor in the spirit of the “bedtime story,” providing a rare, evangelical Christian volume addressed directly to the gay community. Unorthodox in its presentation, this guide speaks the language of those who may feel abandoned, condemned, and damned while avoiding reinterpretations of scriptural passages, making the gospel accessible to a younger, free-spirited generation. Spearheading a volatile topic with candor and grace, it reframes the never-ending question, Is homosexuality a sin? and instead asks the gay community for a cease-fire—to forgive, love, and help put a stop to a cultural war being waged in the world.

This is a crazy book.  It has taken me 8 long years to finally come to a place where I truly believe this raw and honest message of God's incredible, undeniable, unconditional love for ALL of his kids. More specifically - for me.

I also had to figure out how I would survive after being banished from the Christian television world, once this book made it too print.  If it ever did, make it to print. (An A.D.D. Moment: Working in Christian TV has always been God's little joke on me.  When I was 18 I told him I would NEVER work in any Christian endeavor, especially not TV.  Now, after spending most of my life doing just that, I'm telling God I will NEVER win the lottery.)

After my agent received about 30 rejections from all the major publishers, I was pretty much convinced that this little book would be safely tucked up on my shelf and I could continue traveling the planet interviewing people with amazing stories.
But it turned out that God had other plans and a bold little publisher on the Northern Coast of Scotland came from out of nowhere and decided to take a very big risk in a very bad economy to put these incendiary words into print.  I remain forever grateful to Thierry and the folks at Findhorn Press.  And I am trusting that if God can pull this kind of thing out of a hat, he can also figure out a way for me to continue to eat!

GCWG was originally titled: God Hates Fags - and other bedtime Bible stories.  However, some people smarter and more influential convinced me to change the name.  But thankfully, the power and lyrical cadence of the message remains the same.  I still really love the old title. But if I can reach one more reader with a saner cover, it will have been worth it in the end.  And knowing it was once a collection of bedtime bible stories will make the Dr. Seuss quality make a whole lot more sense.
Oh, one last note.  This book is a little like insulin.  If you are a diabetic, it will save you, if you aren't it will kill you. Take only as directed - Reader Beware!)

Gay Conversations with God is an unorthodox presentation of an outrageous love story written for the least likely tribe - a group of God's beautiful sons and daughters who have been told over and over that they are abominable and despised.

But make no mistake.  GCWG is no fairy tale and it's not only for gays and lesbians but for anyone who is sickened by the hateful, money-grubbing Christian brand "As seen on TV"  It is the authentic good news that so many are dying to read.

Only a fool, for Christ's sake.

1. Gay Conversations with God: Straight Talk on Fanatics, Fags and the God Who Loves Us All

2. Gay Conversations with God: Straight Talk on Fanatics, Fags and the God Who Loves Us All

3. Gay Conversations with God: Straight Talk on Fanatics, Fags and the God Who Loves Us All

4. Gay Conversations with God: Straight Talk on Fanatics, Fags and the God Who Loves Us All Langteaux, James Alexander