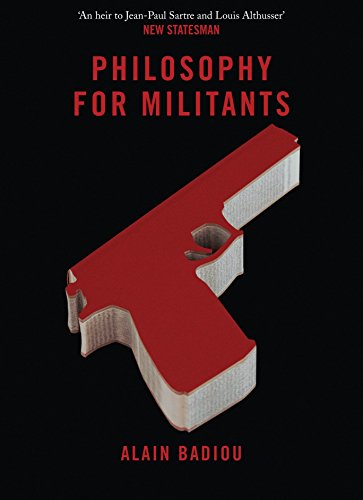 An urgent and provocative account of the modern ‘militant’, a transformative figure at the front line of emancipatory politics. Around the world, recent events have seen the creation of a radical phalanx comprising students, the young, workers and immigrants. It is Badiou’s contention that the politics of such militants should condition the tasks of philosophy, even as philosophy clarifies the truth of our political condition.

To resolve the conflicts between politics, philosophy and democracy, Badiou argues for a resurgent communism – returning to the original call for universal emancipation and organizing for militant struggle.

Alain Badiou teaches philosophy at the École normale supérieure and the Collège international de philosophie in Paris. In addition to several novels, plays and political essays, he has published a number of major philosophical works, including Theory of the Subject, Being and Event, Manifesto for Philosophy, and Gilles Deleuze. His recent books include The Meaning of Sarkozy, Ethics, Metapolitics, Polemics, The Communist Hypothesis, Five Lessons on Wagner, and Wittgenstein’s Anti-Philosophy.

Bruno Bosteels, Professor of Romance Studies at Cornell University, is the author of Badiou and Politics, Marx and Freud in Latin America, and The Actuality of Communism. He is also the translator of several books by Alain Badiou: Theory of the Subject, Can Politics Be Thought? and What Is Antiphilosophy? Essays on Kierkegaard, Nietzsche, and Lacan. He currently serves as the General Editor of Diacritics.

“One of the most important philosophers writing today.” —Joan Copjec

“A figure like Plato or Hegel walks here among us!” —Slavoj i ek

“An heir to Jean-Paul Sartre and Louis Althusser.” —New Statesman