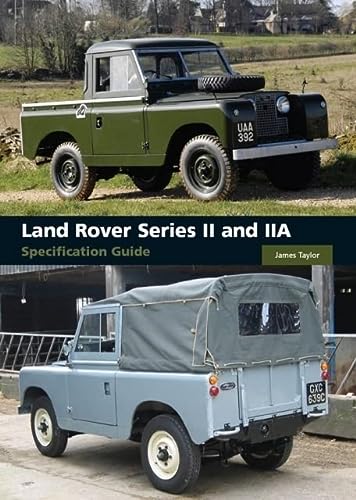 The Series II [1958-61] and Series IIA [1961-71] Land Rovers defined the iconic shape of the vehicle which is still instantly recognizable in today's utility models from Land Rover.  Compiled over nearly thirty years, with the aid of reference material produced by Land Rover and many dedicated enthusiasts, this comprehensive guide to the specifications of the Series II and IIA vehicles looks not only at Land Rovers as they were when they left the assembly lines but also at dozens of options and 'approved' special conversions - and some which did not receive factory approval, too.

After graduating from Oxford and pursuing further academic studies at Reading, James Taylor spent 12 years working in central government. However, the lure of writing about cars – which he was doing in his spare time – proved too great and he decided to turn it into a career. James has now written well over 100 books in all, and among them have been several definitive one-make or one-model titles. He has written for enthusiast magazines in several countries, has translated books from foreign languages, and even delivers effective writing training in both the public and private sectors. He spent the best part of ten years as the editor of Land Rover Enthusiast magazine and has always counted the products of the old Rover Company and of Land Rover as his favourite subject. He also co-organised the “15 Years of Rover V8” event at Donington in 1982.