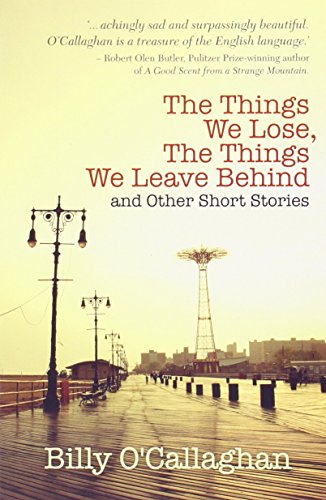 This new collection by Billy O'Callaghan explores everyday existence in the aftermath of cataclysms both subtle and overt. The characters who populate these stories are people afflicted by life and circumstance, hauled from some idyll and confronted with such real world problems as divorce, miscarriage, cancer, desertion, bereavement, and the disintegration of love. The book suggests that the human heart boasts extraordinary resilience. We bear the guilt, sorrow and regret for the things we have lost or given up, we seek the light, and we endure. These thirteen stories attempt to illuminate the darkness.

Billy O'Callaghan was born in Cork in 1974, and is the author of three short story collections: 'In Exile' and 'In Too Deep' (2008 and 2009 respectively, both published by Mercier Press), and 'The Things We Lose, The Things We Leave Behind' (2013, published by New Island Press), the title story of which was honoured with the Irish Book Award for Short Story of the Year.

Over the past decade, more than seventy of his stories have appeared in a wide variety of literary journals and magazines around the world, including: Absinthe: New European Writing, Alfred Hitchcock Mystery Magazine, the Bellevue Literary Review, Bliza (Poland), Confrontation, Crannóg, the Fiddlehead (Canada), Hayden's Ferry Review, the Kenyon Review, the Kyoto Journal (Japan), the Linnet's Wings, the London Magazine, the Los Angeles Review, Narrative, Pilvax (Hungary), the Southeast Review, Southword, Verbal Magazine (Northern Ireland), Versal (Holland), and Yuan Yang: a Journal of Hong Kong and International Writing. He has also written for the Irish Examiner, the Evening Echo and the Irish Times.

A recipient of the 2013 Bord Gais Energy Irish Book Award for Short Story of the Year, and a 2010 Arts Council of Ireland Bursary Award for Literature, his stories have won and been shortlisted for numerous other honours, including the George A. Birmingham Award, the Lunch Hour Stories Prize, the Molly Keane Creative Writing Award, the Sean O'Faolain Award, the RTE Radio 1 Francis MacManus Award, the Faulkner/Wisdom Award, the Glimmer Train Prize and the Writing Spirit Award. He was also short-listed four times for the RTE Radio 1 P.J. O'Connor Award for Drama.