Items related to The Beginning of Spring (ISIS Large Print) 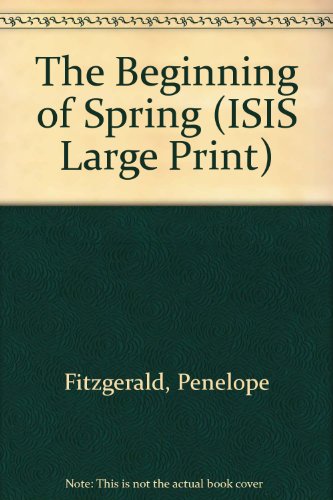 When the Moscow printing business Frank Reid has inherited from his father begins to fail, he feels that his problems could not get any worse, until his wife Nellie leaves him and returns to the West

In March 1913, Frank Reid's wife abruptly leaves him and Moscow for her native England. Naturally, she takes their daughters and son with her. The children, however, only make it as far as the train station--and even after returning home remain unaffected by their brief exile. "They ought either to be quieter or more noisy than before," their father thinks, "and it was disconcerting that they seemed to be exactly the same." Frank's routines, however, drift into disorder as he tries desperately to take charge of life at home and work. Even his printing plant is suddenly confronted by the specters of modernization and utter instability.

In Penelope Fitzgerald's fiction, affection and remorse are all too often allied, and desire and design seem never to meet. Frank wants little more than a quiet, confident life--something for which he is deeply unsuited, and which Russia certainly will not go out of her way to provide. The Beginning of Spring is filled with echoes of past wrongs and whispers of the revolution to come, even if the author evokes these with abrupt comic brio. (In one disturbance, "A great many shots had hit people for whom they were not intended.") As ever, Fitzgerald makes us care for--and want to know ever more about--her characters, even the minor players. Her two-page description of Frank's chief type compositor, for instance, is a miracle of precision and humor, sympathy and mystery. And the accountant Selwyn Crane--a Tolstoy devotée, self-published poet, and expert at making others feel guilty--is a sublime creation. His appetite for do-gooding is insatiable. After one fit of apparent altriusm, "Selwyn subsided. Now that he saw everything was going well, his mind was turning to his next charitable enterprise. With the terrible aimlessness of the benevolent, he was casting round for a new misfortune." As she evokes her household of tears and laughter, Fitzgerald's prose is as witty as ever, rendering the past present and the modern timeless. --Kerry Fried