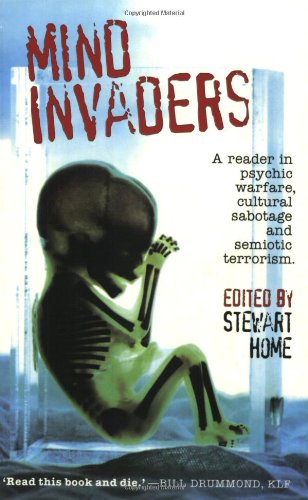 In London, the Association of Autonomous Astronauts is expanding the terrain of social struggle, launching an independent proletarian space exploration programme. Future ventures shall include raves in space. In Italy, the Bologna Psychogeographical Association is helping to levitate government buildings and playing mind games with primetime TV. Meanwhile their London counterparts are busy exposing the macabre occult practices of the British Royal Family, the Decadent Action plots to bring capitalism to its knees through a programme of exorbitant shopping sprees leading to hyper-inflation. Break out the champagne and canapes!

About the Author:
Stewart Home is an art 'terrorist', writer and lecturer who lives in Scotland. He is the author of Mind Invaders, Blow Job, Come Before Christ and Murder Love, and Slow Death, and the editor of Suspect Device.
Review:
?Stewart Home curates the fistful of mercury that is the commonwealth of the ?mind invader?. Texts so crazy you have to trust them... A dazzling anti-anthology? Iain Sinckair ?In the 2090s Mind Invaders will be revered as the roots to the creative paranoia that has corroded our once mighty civilisation. Read this book and die? Bill Drummond, KLF ?By turns anarchic, satirical, arcane, sinister, paranoid and playful, if you want to boldly go where the real Left fears to tread, this is it? Sunday Times