Items related to The Rough Guide to Spain (10th Edition) 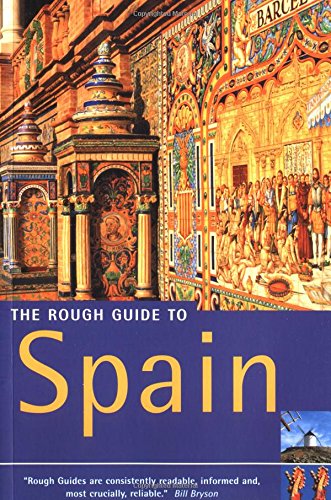 If you are coming to Spain for the first time, be warned: this is a country that fast becomes an addiction. You might intend to come just for a beach holiday, or a tour of the major cities, but before you know it you’ll find yourself hooked by something quite different – by the celebration of some local fiesta, perhaps, or the amazing nightlife in Madrid, by the Moorish monuments of Andalucia, by Basque cooking, or the wild landscapes and birds of prey of Estremadura. And by then, of course, you will have noticed that there is not just one Spain but many. Indeed, Spaniards often speak of Las Españas (the Spains) and they even talk of the capital in the plural – Los Madriles, the Madrids.

This regionalism is an obsession and perhaps the most significant change to the country over recent decades has been the creation of seventeen autonomías – autonomous regions – with their own governments, budgets and cultural ministries. The old days of a unified nation, governed with a firm hand from Madrid, seem to have gone forever, as the separate kingdoms which made up the original Spanish state reassert themselves. And the differences are evident wherever you look: in language, culture and artistic traditions, in landscapes and cityscapes, and attitudes and politics.

The cities – above all – are compellingly individual. Barcelona, for many, has the edge: for Gaudí’s splendid modernista architecture, the lively promenade of Las Ramblas, designer clubs par excellence, and, not least, for Barça – the city’s football team. But Madrid, although not as pretty, claims as many devotees. The city and its people, immortalized in the movies of Pedro Almodóvar, have a vibrancy and style that is revealed in a thousand bars and summer terrazas. Not to mention three of the world’s finest art museums. Then there’s Sevilla, home of flamenco and all the clichés of southern Spain; Valencia, the vibrant Levantine city with an arts scene and nightlife to equal any European rival; and Bilbao, a new entry on Spain’s cultural circuit, due to Frank Gehry’s astonishing Guggenheim museum.

Monuments range just as widely from one region to another, dependent on their history of control and occupation by Romans and Moors, their role in the "golden age" of Imperial Renaissance Spain, or their twentieth-century fortunes. Touring Castile and León, you confront the classic Spanish images of vast cathedrals and reconquista castles – literally hundreds of the latter; in the northern mountains of Asturias and the Pyrenees, tiny, almost organic Romanesque churches dot the hillsides and villages; Andalucía has the great mosques and Moorish palaces of Granada, Sevilla and Córdoba; Castile has the superbly preserved medieval capital, Toledo, and the gorgeous Renaissance university city of Salamanca; while the harsh landscape of Estremadura cradles the ornate conquistador towns built with riches from the "New World".

Not that Spain is predominantly about buildings. For most visitors, the landscape holds just as much fascination – and variety. The evergreen estuaries of Galicia could hardly be more different from the high, arid plains of Castile, or the gulch-like desert landscapes of Almería. Agriculture makes its mark in the patterned hillsides of the wine- and olive-growing regions and the rice fields of the Levante. Spain is also one of the most mountainous countries in Europe, and there is superb walking and wildlife in a dozen or more sierras – above all in the Picos de Europa and Pyrenees. Spain’s unique fauna boast protected species like brown bears, the Spanish lynx and Mediterranean monk seals as well as more common wild boar, white storks and birds of prey.

One of Spain’s greatest draws is undeniably its beaches although with infinitely more variety than you would be led to believe from the sun-and-sand holiday brochures. Long tracts of coastline – along the Costa del Sol, in particular – have been developed into concrete hotel and villa complexes but delightful pockets remain even on the big tourist costas. On the Costa Brava, the string of coves between Palamos and Begur are often overlooked, while in the south there are superb windsurfing waters around Tarifa and some decidedly low-key resorts along the Costa de la Luz. In the north, the cooler Atlantic coastline boasts the surfing sands of Cantabria and the unspoilt coves of Galicia’s estuaries. Offshore, the Balearic islands have some superb sands and, if you’re up for it, Ibiza also offers one of the most hedonistic backdrops to beachlife in the Mediterranean.

Wherever you are in Spain, you can’t help but notice the Spaniards’ infectious enthusiasm for life. In the cities there is always something happening – in bars and clubs, on the streets, and especially at fiesta times. Even in out of the way places there’s a surprising range of nightlife and entertainment, not to mention the daily pleasures of a round of tapas, moving from bar to bar, having a beer, a glass of wine or a fino (dry sherry) and a bite of the house speciality.

The identity and appeal of each of the regions is explored in the chapter introductions, where you’ll find a rundown on their highlights, while in the following pages you’ll find a selection of the very best of Spain.

Overall, spring, early summer and autumn are ideal times for a Spanish trip – though the weather varies enormously from region to region. The high central plains suffer from fierce extremes, stiflingly hot in summer, bitterly cold and swept by freezing winds in winter. The Atlantic coast, in contrast, has a tendency to damp and mist, and a relatively brief, humid summer. The Mediterranean south is warm virtually all year round, and in parts of Andalucía positively subtropical, warm enough to wear a T-shirt by day even in the winter months.

In high summer the other factor worth considering is tourism itself. Spain plays host to some thirty million tourists a year – almost one for every resident – and all the main beach and mountain resorts are packed in July and August, as are the major sights. August, Spain’s own holiday month, sees the coast at its most crowded and the cities, by contrast, pretty sleepy.