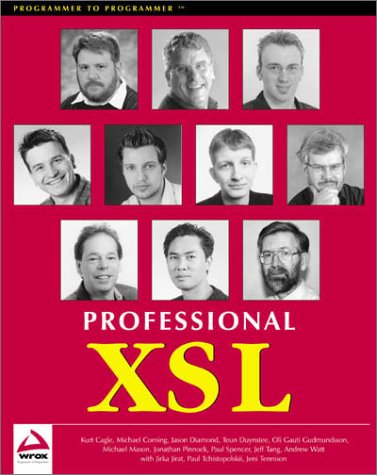 Professional XSL takes an applied, tutorial-style approach to teaching the core fundamentals of the XSLT, XPath and XSL-FO specifications. You'll learn how to create well structured and modularized stylesheets to generate your required output, how to change, filter, and sort data, and how to incorporate other content for presentation purposes.

XML is now the established standard for platform-neutral data storage and exchange, separating content from presentation. Its popularity is due to the flexibility of the language and the ability to reuse the data in a variety of ways. XSL is a key technology for working with XML, and is comprised of two parts: XSLT is the official language for transforming XML from one format to another, whether for restructuring/selectively processing the data or presenting the data for display; XSL-FO is a proposed vocabulary for incorporating information concerning how the document should be arranged for presentation. A related standard, XPath, is the language for addressing specific parts of an XML document.

From the Publisher:
This book has been selected by the editors of Wrox Press to be part of the Wroxbase website.

This book is ideal for developers who have a good understanding of XML data and its structure, and who need to transform the data or apply styling for business-to-business and web applications

About the Author:
Kurt Cagle is a writer and developer specializing in XML and Internet related issues. He has written eight books and more than one hundred articles on topics ranging from Visual Basic programming to the impact of the Internet on society, and has consulted for such companies as Microsoft, Nordstrom, AT&T and others. He also helped launch Fawcette's XML Magazine and has been the DevX DHTML and XML Pro for nearly two years.

Michael Corning is a Memetic Engineer at Microsoft busy building a software test infrastructure for Application Center based on the .NET Frameworks. At night he writes for Wrox Press (coauthored "Professional XSL"), asptoday.com, ActiveWeb Developer magazine, and has started a monthly column in XML Developer Magazine called, "Confessions of an XSLT Bigot." His first book was "Working with Active Server Pages," Que, 1997. Corning speaks at conferences around the world preaching the good news of schema-based programming.

Teun Duynstee is lead developer at Macaw, a Dutch cutting edge Web-building and consulting firm, specializing in building complex enterprise Web-applications on the Windows DNA platform. What he likes to do most are enthusing others with the great new possibilities of Web technology and sleeping late. You can reach him at proxsl-feedback@duynstee.com.

Oli Gauti Gudmunsson works for SALT, acting as one of the two Chief System Architects of the SALT systems, and as Development Director in New York. He is currently working on incorporating XML and XSL into SALT's web authoring and content management systems. He has also acted as an instructor in the Computer Science I Java course at the University of Iceland. As a 'hobby he is finishing his BS degree in Computer Engineering. Oli can be reached at oli.gauti@salt.is.

Mike Mason graduated from Oxford in 1999 with a BA in Computation, and began working for a local company called DecisionSoft. Whilst there, Mike was involved in creating the XML Script language and related tools. He's now working for a London based start-up called Digital Rum, developing mobile commerce applications using Java, XML and XSLT. Mike can be reached at mgm@eskimoman.net.

Jonathan Pinnock started programming in Pal III assembler on his school's PDP 8/e, with a massive 4K of memory, back in the days before Moore's Law reached the statute books. These days he spends most of his time developing and extending the increasingly successful PlatformOne product set that his company, JPA, markets to the financial services community. He seems to spend the rest of his time writing for Wrox, although he occasionally surfaces to say hello to his long-suffering wife and two children.

Paul Spencer, after three years of freelance XML Consultancy, decided at the end of 2000 that he had had enough of working 7 day weeks and founded alphaXML Ltd, of which he is CTO. Based in Henley-on-Thames in the UK, he leads an expanding team providing XML services throughout the world. Paul is XML adviser to the UK Inland Revenue, the Government Gateway and Office of the e-Envoy, so the workload never really dropped.

Andrew Watt is an Independent Consultant who enjoys few things more than exploring the technologies others have yet to sample. Since he wrote his first programs in 6502 Assembler and BBC Basic in the mid 1980's he has sampled Pascal, Prolog and C++ among others. More recently he has focused on the power of Web-relevant technologies including Lotus Domino, Java and HTML. His current interest is in the various applications of the Extensible Markup Meta Language, XMML, sometimes imprecisely and misleadingly called XML. The present glimpse he has of the future of SVG, XSL-FO, XSLT, CSS, XLink, XPointer etc when they actually work properly together is an exciting, if daunting, prospect. He has just begun to dabble with XQuery. Such serial dabbling, so he is told, is called "life-long learning".